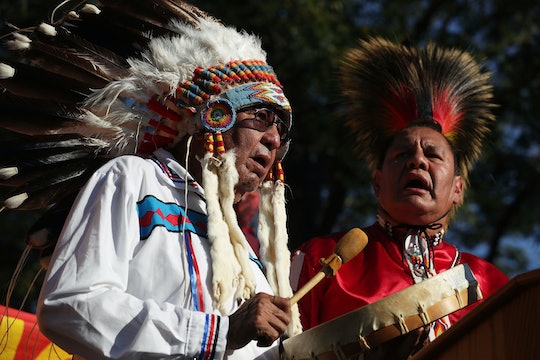 What Is Standing Rock? The Story Behind The Reservation That's Making Headlines

As many of its members and allies continue to ardently protest the construction of the massive oil pipeline near its land, the Standing Rock Sioux tribe is seeking to protect not just its water supply, sacred burial grounds, and prayer sites, but for its right "to be able to call a place home," as one demonstrator told NPR. In many ways, the encroachment of the $3.8 billion project in North Dakota reflects of the mistreatment that the people of the Standing Rock Sioux Reservation have sustained at the hands of the U.S. government for nearly 200 years. It's an economic issue for them, sure, and it's certainly an environmental one. But it's also another chapter in the story of their subjugation — and their resilience.

The Native American people still trying to fend off the advance of construction equipment and crews moving ever closer to installing a portion the Dakota Access Pipeline less than a mile from the Standing Rock reservation have been actively opposing the pipeline since 2014. Members fear that it could contaminate the Missouri River, their sole source of drinking water, if it were to malfunction, and decry the damage it has already done to ancient, sacred lands.

Now, much of the country is watching as the self-described "protectors" and law enforcement clash near the camp site they've set up for the winter.

And for the people of Standing Rock in particular, this government encroachment on their land is reminiscent of other abuses. When the original Great Sioux itself was established by treaty with the U.S. government in 1868, it encompassed all of what is now South Dakota west of the Missouri River — and that included the "sacred" Black Hills and the river itself, according to the tribe's official website.

But the federal government would not ultimately respect that agreement. The millions of miles of land originally allocated to them land has dwindled severely since then, as an interactive map from The Seattle Times shows.

In 1877, Congress claimed the Black Hills, which rightfully belonged to the Native Americans, despite the fact that it did not secure the approval of three-fourths of the adult males in the tribe that the treaty required for a cession of land. And just two years later, Congress again reduced the size of the Great Sioux reservation, dividing it up into six parcels of land. That's when the Standing Rock Sioux Reservation was born, as one of these segments of the old reservation.

Perhaps this is just another reason why it is so insulting for these Native peoples to only now — after struggling against the Dakota Access Pipeline since 2014 — hear President Obama say that the government will look into rerouting the pipeline, as he did Tuesday.

In an interview with NowThis, the president said he thinks there may be a way to meet the demands of the demonstrators:

We’re monitoring this closely. My view is that there is a way for us to accommodate sacred lands of Native Americans. And I think that right now the Army Corps is examining whether there are ways to reroute this pipeline.

We’re going to let it play out for several more weeks and determine whether or not this can be resolved in a way that I think is properly attentive to the traditions of First Americans.

That's encouraging, but here's the rub: The plans for the pipeline were changed once before, when an earlier proposed route called for it to cross near Bismarck, North Dakota. And those plans were scrapped in part because of concerns that it would pose a danger to the city's water supply. That's a major concern for the Native American protesters as well, but unlike the area near the Standing Rock Sioux Reservation, more than 90 percent of the people living there are white, according to 2010 Census Bureau numbers.

Considering the history of unfair treatment that the Standing Rock tribe has endured at the hands of the federal government, it's hardly shocking that the Dakota Access Pipeline situation had escalated the way it has. The activists involved can only hope that it does not culminate in history repeating itself.