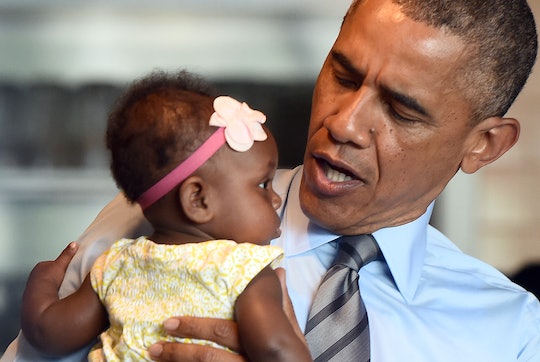 What Is The BABIES Act? It's Great News For Parents

Dads can finally take their toddlers to the library without fear, because President Obama (aka America's dad) has signed the BABIES Act into law. The bill will require all bathrooms in government-owned or government-financed buildings to have "physically safe, sanitary, and appropriate" baby-changing facilities. And when I say "all," I mean all; the law applies to both men's and women's restrooms. That means that changing a diaper is no longer women's work by default, and fathers no longer have to change their kids in the way-back of the minivan.

Unfortunately, the law only applies to federal buildings, so dads might still be out of luck at the mall, the zoo, or a restaurant, but hey, at least he can stop by the post office on the way home, right? That is, if the post office happens to have restrooms available to the general public; the law doesn't apply to facilities that aren't available for public use. But hey, it's a start! This is actually the first bill to address changing tables at all; before, they weren't required anywhere (as any parent who's taken a 2-year-old to a diner or a pizza place knows). Now, at least they'll be required at courthouses and the Smithsonian. Baby steps, right?

Having changing tables in men's restrooms isn't a lot to ask; they cost less than $200 and likely pay for themselves in customer loyalty pretty quickly. Speaking for myself, when my son was in diapers I knew exactly which stores did and did not offer changing stations, because you don't get to choose when your baby needs a change. If I'd known of any establishments that offered changing stations in the men's room, I may have even gone out of my way to patronize them during family outings, because it would have been nice to be the one to stay at the table for once while my husband did the dirty work.

Last year, Ashton Kutcher complained about the problem on Facebook, posting, "There are NEVER diaper changing stations in mens public restrooms. The first public men's room that I go into that has one gets a free shout out on my FB page!" He later started a petition on Change.org to convince retailers to install changing stations in men's rooms (a little misguided, since he singled out two stores that actually already did), but his biggest contribution to the fight was simply calling attention to the issue. Parenting isn't just for women, and it's time everyone accepted that. Although one of our presidential candidates disagrees, thankfully, our current president addressed the issue before leaving office.