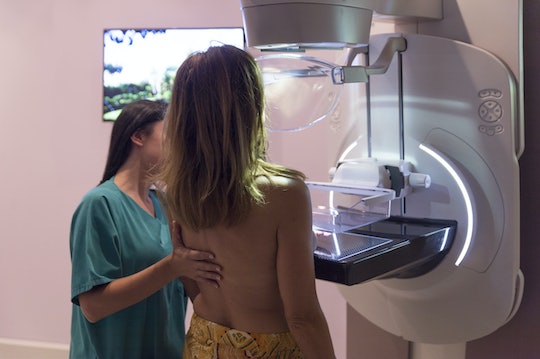 Here's Everything You Need To Know About The BRCA Gene

October is Breast Cancer Awareness Month, which means it's not only time to brush up on your general knowledge about breast cancer and how to perform a self exam, but to also learn about more complicated aspects of the disease. For instance, what is the BRCA gene and how do you know if it's something that will affect you?

Here's the gist: BRCA is an abbreviation for "breast cancer" gene (with the first two letters of "breast" and "cancer" representing BRCA), according to the National Breast Cancer Foundation, Inc. The genes are comprised of the BRCA1 and BRCA2, and they are ones that everyone has.

"The BRCA genes are tumor suppressor genes and are key to preventing breast cancer," says Dr. Dorraya El-Ashry, the chief scientific officer for the Breast Cancer Research Foundation (BCRF). "They help repair DNA breaks that can lead to cancer and the uncontrolled growth of tumors."

But an increased risk of breast cancer may arise, El-Ashry tells Romper, when the genes do not work properly as a result of being altered or damaged and cause a gene mutation.

The gist: Mutated BRCA genes are potentially problematic; not BRCA genes themselves.

There are, of course, tests that can tell a person whether or not they are carrying the gene mutation. The National Cancer Institute at the National Institutes of Health says that while some tests specifically look for the BRCA1 or BRCA2 gene mutations that a person's family member might have, others test for "all of the known harmful mutations in both genes." An example of this is multigene (panel) testing, which uses sequencing to look at a number of genes that are linked to an increased risk of breast and ovarian cancer.

No matter the test, a DNA sample, like blood or saliva, is typically required to conduct an analysis.

"When we consider who should be tested for BRCA gene mutations, we first recommend reviewing family history of cancer, specifically any family histories of breast, ovarian, and prostate cancers since these are the types associated with the BRCA gene," Dr. Jane Mendez, breast surgical oncologist and chief of breast surgery at Miami Cancer Institute, tells Romper. "Beyond the more common cancers associated with BCRA, it is also important to ask about other cancers, as there are genes associated with other genetic syndromes that can lead to gastric, pancreatic and melanoma cancers."

Fallopian tube (women) and prostate (men) cancers are also more common in people with BRCA1 and BRCA2 mutations. Both men and women see an increased risk of pancreatic cancer when they carry BRCA1 and BRCA2 gene mutations.

Once family history of the disease is established, Mendez says healthcare providers will then work to identify who in the family has had the cancer and their age at time of diagnosis. For example, she says, a direct relative can increase a person's risk level.

"If they were diagnosed at a later age (post-menopausal), there is less risk than if the diagnosis occurred at a younger age or at a pre-menopausal stage, for example," she says.

Mendez says ethnicity is also considered when identifying who should be tested for BRCA gene mutations. "Certain ethnic groups have a higher incidence of genetic mutations, such as Hispanics, African-Americans and those of Ashkenazi Jewish descent," she says.

Ultimately, concerns about the BRCA genes (and breast cancer in general) should be discussed with your healthcare provider in order to take a look at all of your options. Risk reduction is key when it comes to breast cancer, and there's no better time than October to learn everything you need to know.