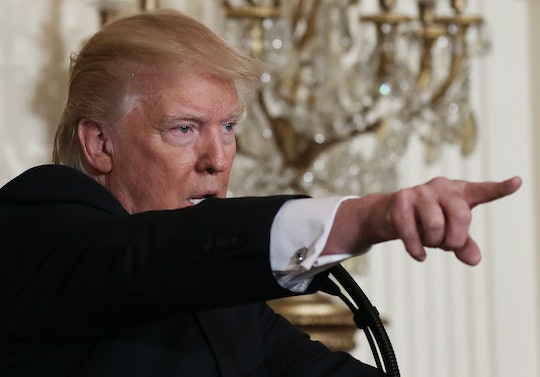 President Trump held a rare press conference on Thursday, supposedly to answer questions and discuss several controversial issues within the White House. Naturally, not many questions were answered... and, thanks to his exchange with White House correspondent April Ryan, a new question has popped up. After taking Ryan's question, President Trump appeared uncertain as to what the Congressional Black Congress might be, going so far as to ask Ryan (who is black) if they might be "friends of yours."

The Congressional Black Caucus has been representing persons of color in Congress since 1971, so it's not exactly new here. The legislative agenda of the CBC is focused primarily on providing vulnerable communities with:

When White House correspondent April Ryan initially posed a question to Trump about whether or not he planned to include the CBC in talks about his "urban agenda" on Thursday, he seemed utterly confused. So she decided to spell it out for him, according to Vox:

“Are they friends of yours?"

Seemingly realizing his faux pas, Trump fell back on his safety net; He knows everybody and he thinks they're great. He went on to tell Ryan that he knew a few members of the CBC, and that he thinks "it's great."

Somehow, I don't know... call me crazy, but it almost seemed like he wasn't being entirely forthcoming. But that could just be me.

Not only should Trump be well aware of the CBC because he is the president and it's kind of his job to know these things, the CBC also sent him a letter in January to address some of its concerns with the New Deal. Which I'm guessing, from his answer on Thursday, he probably never read.

President Trump has struggled to find his footing with black voters — he has a history of stereotyping (I defy you to find an instance when Trump mentions black people without also somehow bringing up "inner city"), and this recent faux pas won't help him. Perhaps it's time for him to stop stewing over every slight, real or imagined, that has befallen him and acquaint himself with established organizations that are working to help Americans.