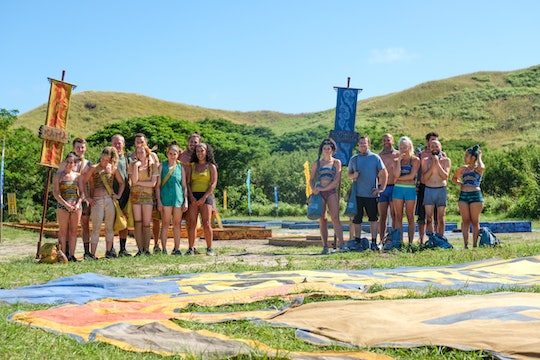 One of the best things about Survivor is getting to watch the cast kill themselves in physical competitions while I sit on my couch at home and watch while eating Doritos and barely breaking a sweat. Something a lot of fans look forward to, however, are the game twists and this season, the big twist is all about fighting your way back to the game. But the Edge of Extinction on Survivor Season 38 probably isn't going to be that easy, even for the fiercest competitors.

If bringing back former players wasn't enough of a surprise for new Survivor castaways this season, the bigger twist is the option to choose the unknown on a desolate beach in the Edge of Extinction twist or leave if you’re voted out. Whenever someone is voted out by the tribal council this season, they will be given the choice to continue on their path to leave the show and the main island, or take a boat on their own to a beach away from the main island to wait for further instructions on competing to get back in the game.

Before the Season 38 premiere, Survivor host and executive producer Jeff Probst told Entertainment Weekly that upon being voted out, castaways will have no clues about what lies ahead in the Edge of Extinction.

"When you’re voted out, you’re going to leave Tribal and walk around the corner and finally come to this lighted torch with a signpost," he explained. "And the signpost will say, 'You have a decision to make. If you’re done playing and you want your adventure to end, keep walking.'"

Probst said that surviving on the Edge of Extinction will be different than living on the main island with the other castaways. The voted off contestants will have to work harder to survive and possibly have to work together with players they will eventually have to battle against to go back to the real game. If at any point they want to throw in the towel, the players can raise a white flag for a boat to pick them up, but other than that, they are essentially alone on this other smaller island away from the rest of the Survivor game.

So far this season, Reem is the only castaway to accept the Edge of Extinction offer and make her way to the dark abandoned beach on her own. Hopefully, she will soon be joined by Keith, but right now it’s not clear if he takes the offer or chooses to go home instead. Since it’s so early in the game, I would imagine most castaways would take the offer, even with the repercussions and details being pretty foggy. They’ve all only been in Survivor mode for a couple of weeks and most of them likely figure that the Edge of Extinction island is similar enough to what they have already experienced.

Reem has already struggled with her stay on the Edge of Extinction island because of the extreme isolation. Since she is the first castaway voted off and the first to be given the opportunity to accept the twist, she’s alone right now. Besides just surviving on her own on the beach, she’s been left with a fear of the unknown. If Keith decides to join her, she might consider staying to get her chance to hopefully fight her way back to the actual game.

When Probst spoke to Entertainment Weekly about Edge of Extinction, he said the goal was to see how far castaways would go with the idea that this isolated location would lead to a chance to get back to the game. So far, it’s proving to be more of a challenge than anything else to far this season.