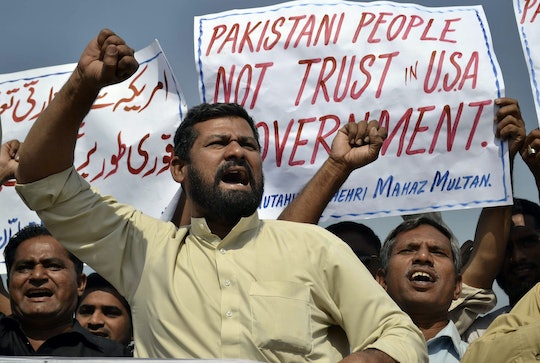 What Is The Haqqani Network? The Terrorist Group Behind Bowe Bergdahl's Capture Has A Lot Of Power

In episode four of the Serial podcast this week, "The Captors," host Sarah Koenig attempts to navigate listeners through the complicated inner politics, squabbles, and dynamics of Bowe Bergdahl's captors — the Haqqani network – a terrorist network parallel to the Pakistani Taliban. If you're looking for a simple answer to the question "what is the Taliban" — well, you're not going to get something quite so straightforward. Koenig spoke with New York Times journalist, David Rohde, who was also captured by the Taliban in 2008; through Rohde's captivity experience, Serial listeners got a very overhead view of what the Pakistani Taliban and Haqqani network were like at the time of Bergdahl's capture.

The Haqqani network has been described as a "ruthless crime family" and even "the Sopranos of the Afghanistan war." Headed by Jalaluddin Haqqani and his son Sirajuddin, they are separate but allied with the Taliban, with their network concentrated along the Afghan-Pakistani border. Politics and local dynamics aren't as cut and dry as alliances and borders, however, as Koenig reveals in this week's episode. Though allied with the Taliban, the Haqqani network enjoys some level of freedom and privilege within Pakistan. When Koenig sought an explanation for this anomaly, she revealed the dynamics and "fraught" and "complicated."

Comprised of many parts, the Haqqani network is at once a group of Islamic nationalists, a militant group, and business owners; they have their own alliances, funding, and yet, are still part of the Taliban — even using the same stationery at the Taliban, Koenig revealed. Though the Haqqanis are a Pashtun, Afghan family, they are headquartered in Pakistan. In the 1970s, the Haqqani fought the Afghan government and then the Soviets after they invaded Afghanistan; and then the U.S. supplied millions of dollars in the 1980s to help the Haqqani in their fight against the Soviets.

It gets even more complicated. Despite being a militant crime network, the Haqqani are tolerated within Pakistan because they keep Afghanistan a "manageable neighbor," and, as Koenig explained, "they help prevent Pakistan's other neighbor — India — from establishing any serious hold or influence in Afghanistan." Even then, the Haqqani are tolerated by the Pakistani government more than the Pakistani Taliban, because the Pakistani Taliban doesn't get along with the government.

Got it? Yeah... If you thought trying to keep up with the teenage drama of Woodlawn High School in the first season of Serial was overwhelming, good luck keeping up with Taliban politics this season. (I feel like I need an organizational chart of the Taliban at this point.)

After all the politics and alliances, why does all of this matter? Koenig's overhead view of the Taliban as it operated in 2008 provides an important political and cultural backdrop for with Bergdahl's capture takes place – and sets us up for the delicate intricacies of international diplomacy that had to happen to bring Bergdahl home — as Koenig hints we'll finally hear more about in next week's episode.

Serial is available for streaming online Thursdays at 6 a.m. Eastern.