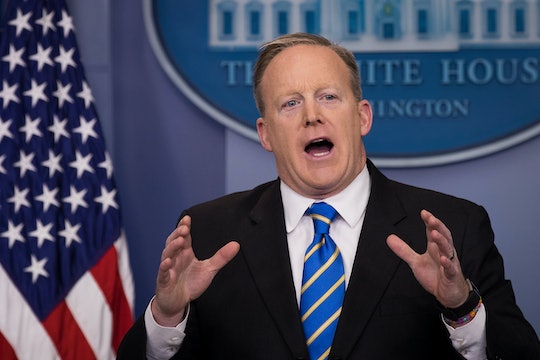 The Helms Amendment: What You Need To Know

President Trump has been in the Oval Office for just four days, and he's already pushing forward with plans to regulate women's reproductive rights. Surrounded by members of his Cabinet (all seven of them male, by the way) on Monday, Trump sat in the Oval Office in 2017 and signed an executive order to take abortion rights back in time. The executive order was a so-called "Global Gag Rule" forbidding any disbursement to cover abortion services by organizations overseas who receive federal funding. Except there is already this thing called the Helms Amendment, which has been in place since 1973, that restricts that. In short, Trump's move was essentially pointless.

No foreign assistance funds may be used to pay for the performance of abortion as a method of family planning or to motivate or coerce any person to practice abortions.

Despite this, White House Press Secretary Sean Spicer told reporters this week that Trump's "Global Gag Rule" (which was rescinded by President Obama in 2009) would "end the use of taxpayer dollars to fund abortions overseas, along with coercive abortion and sterilization practices." Spicer went on to say that this policy would also prevent federal funds from “being spent overseas to perform an action that is contrary to the values of this president."

Except... again: That rule has been in place for 45 years already.

The Helms Amendment was already strict and difficult to define; while it clearly states that no federal funding would be provided for abortions as "a method of family planning," whether or not abortions could be performed in the cases of rape or life endangerment was up for interpretation. Which meant women living in war zones would not necessarily receive aid if they were raped and became pregnant.

While the Helms Amendment ensured no federal funds could be used for abortions on an international level, Trump's executive order is much, much worse. The Mexico City policy, also known as the global gag rule, came under fire in 2006 when the Congressional General Accountability Office concluded it got in the way of ending the international fight to end HIV. Not only does it make abortion access essentially unattainable for millions of women around the globe, it also impedes conversation about reproductive rights, prevention of sexually transmitted diseases, and family planning. Abortion cannot even be discussed as an option. Because I guess the First Amendment and that whole freedom of speech thing isn't a big deal anymore.

Every year, the United States government spends around $600 million on international programs for women to support family planning and reproductive health programs. This enables 27 million women to access contraception and women's health services. None of that money is being spent on abortions, as per the Helms Amendment. So why was Trump spending his fourth day in office surrounded by a bunch of white men signing a seemingly superfluous order on international abortions?

Because he doesn't just want to stop women from having abortions. He wants to stop them from even talking about them.