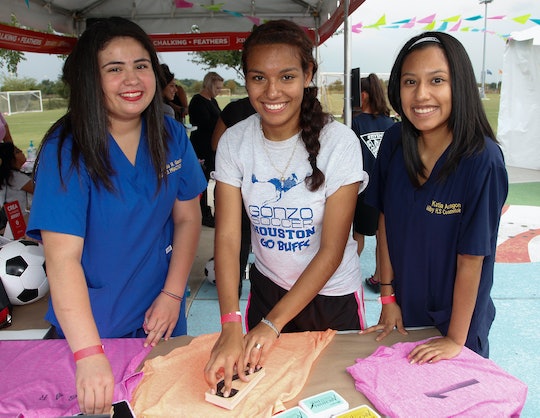 What Is The History Of Hispanic Heritage Month? It's Important To Know (And Celebrate)

There's a man in the race for the White House who launched his campaign by calling Mexicans "rapists" and criminals and whose major international policy proposal is to erect a "big, beautiful, powerful wall" along the U.S.-Mexico border. However, our current president, Barack Obama, has proclaimed the estimated 55 million Latinx people in the United States have infact enriched this country with "faith and passion, a sturdy work ethic and profound devotion to family," — arguably one of the many reasons we celebrate Hispanic Heritage Month each year. It starts today, Sept 15, and the history of Hispanic Heritage Month chronicles this resilient, innovative demographic's ability to overcome hardship and highlights their many contributions to the United States.

Despite what Republican presidential nominee Donald Trump has to say — or, perhaps in many ways, because of it — Hispanics in the United States are gearing up for the 2016 celebrations to honor their food, culture, music, and art as enthusiastically as ever. Well, since 1968, when President Lyndon B. Johnson signed the bill designating the week of Sept 15 "National Hispanic Heritage Week." As the years passed, though, it was made undeniably clear that just one week to focus on the legislative interests of Hispanic Americans as just not enough. So, in 1988, the week became a month.

Rep. Esteban Torres, who championed efforts to secure the expansion, said the monthlong celebration would allow for more time to plan activities to celebrate Hispanic culture and achievement, according to information from the U.S. House of Representatives' website. "We want the public to know that we share a legacy with the rest of the country, a legacy that includes artists, writers, Olympic champions, and leaders in business, government, cinema, and science."

Decades later, both Hispanic and Latinx Americans are still embracing this idea and carrying out the original intent of the month, which stretches until Oct 15. In Washington, D.C., the National Gallery of Art will have Spanish-language guided tours, according to the Latin Times. New York will host the El Barrio Latin Jazz Festival, and Los Angeles festivities will include a piñata-making workshop for kids and a Mexican War of Independence reenactment.

According to The Huffington Post, the decision to start Hispanic Heritage Month on Sept 15 each month was by no means arbitrary: the date coincides with the independence of Costa Rica, El Salvador, Guatemala, Honduras and Nicaragua; Mexico celebrates the anniversary of its independence the very next day, and Chile does the same on Sept 18.

And while that history is integral to many people's cultural identities, it's just as important to note how deeply Hispanic Americans are woven into the very fabric of of the United States and what so many people consider to be "American." Sixteen-year-old gymnast Laurie Hernandez, for example, won both gold and silver for the United States at the Rio Olympics last month. Lin Manuel-Miranda, who created the sold-out-forever Broadway musical Hamilton, is the son of a man who left Puerto Rico for New York City at 19 years of age.

As Obama wrote in his presidential proclamation of Hispanic Heritage Month this year, Hispanic Americans' "lasting achievements and devotion to our Nation exemplify the tenacity and perseverance embedded in our national character." The people of the United States should continue to recognize the value in diversity and the importance of all kinds of perspectives, cultures, and traditions. Celebrating Hispanic Heritage Month is one way to never forget to take the time to do just that.