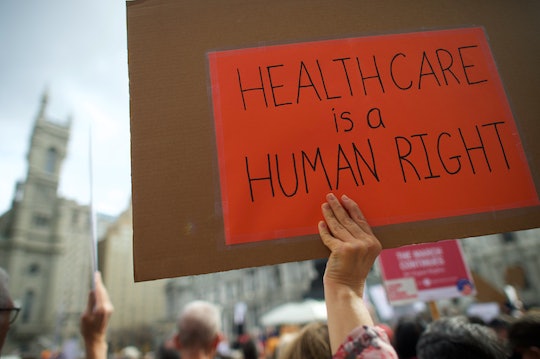 Here's Why The BCRA's Lifetime Cap Is Cruel

Senate Republicans revealed their proposed health care legislation last week after crafting it in secret, and the reason for their reluctance to share earlier is evident in its draconian, cruel text: The Better Care Reconciliation Act (BRCA) guts Medicaid in favor of tax cuts for the super rich. It would dramatically drive up premiums for older consumers; federal funding for Planned Parenthood would be temporarily suspended. And it would allow states to relax or eliminate a critical provision of the current health care law, the Affordable Care Act (ACA), that protects chronically ill patients and their families from financial devastation. To that end, anyone who truly cares about Americans' lives and health should know what the "lifetime cap" is and why it's so important to preserve the ban on it no matter what.

The concept of the lifetime cap, or "limit," is simple — and brutal. Before President Obama succeeded in passing his signature health care bill, the ACA, in 2010, insurance companies had the free rein to limit the amount of health care dollars a patient could use over the time enrolled in a health care plan, according to HealthCare.gov. An insurer would "cap" spending on benefits at $1 or $2 million, for example, and the consumer would be personally responsible for the rest. Companies could legally limit their own spending on a benefit-by-benefit basis, such as refusing to pay more than $200,000 for organ transplants, ever.

The advent of the ACA made such lifetime (and annual) limits illegal — as long as the care the consumers sought fell under the purview of the ACA's 10 "essential health benefits." Essential health benefits, or EHBs, include truly crucial aspects of care like maternity care, mental health care, prescription drugs, hospitalizations, and more. Under the ACA, or Obamacare, all plans must include these. The passage of the BCRA would allow individual states to seek waivers to obliterate this provision, according to CNN. As a result, not all plans that insurers offered would be comprehensive — meaning that sick people would forced to pay more for plans that meet their needs.

What's more, the ban on lifetime limits could be rendered meaningless if states decided to take advantage of the waiver option, Matthew Fiedler of the Brookings Institution wrote around the time the House approved its own version of this bill in May. Remember, the Obamacare prohibition of lifetime and annual limits hinges on a uniform, federal definition of what EHBs are. Allowing states to rework that definition opens the door to a nationwide assault on this important ban on lifetime and annual limits as the understanding of what's considered "essential" disintegrates.

Consider the story of 2-year-old Ethan Chandra, who has had four open chest surgeries to address his heart problems that stem from a rare genetic condition. His mom, Ali Chandra, shared in a viral Twitter thread last week that the cost of his care has already well exceeded $1 million — but that the family's affordable health care has saved them from shouldering the majority of that expense. And regardless of that dollar amount, he'll likely require expensive, life-sustaining medical care for the rest of his life. "A lifetime cap on benefits is the same as saying, 'Sorry, you're not worth keeping alive anymore. You're just too expensive,'" Chandra tweeted.

At the end of the day, Senate Republicans who support this bill (and it is only Republicans) are sending the message that people with chronic conditions are simply on their own. No amount of the "personal responsibility" conservatives so love to tout would have saved little Ethan from the illness that has plagued him his entire short life — so why should his country forsake him and his family just to lower taxes now?