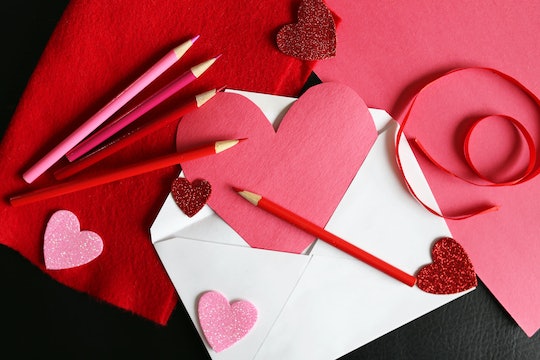 When stores begin replacing red stockings with red boxes of candy, they are telling you to get ready for Valentine’s Day. From the moment the new year starts, you are constantly exposed to depictions of hearts and love, which can really throw you. If you’re in a relationship, you may start worrying about getting your SO the perfect gift. If you're single, you’re probably wondering when the universe is going to connect you with your special someone. Either way, for many people the holiday means much more than candy hearts, but exactly what is the meaning behind Valentine’s Day?

Love is personal and intimate, so Valentine’s Day can hold a different meaning for each and every person who celebrates it. But the holiday tradition didn’t begin with stuffed teddy bears and red balloons — it actually has a pretty dark and mysterious history. It all possibly began with ancient Rome’s February celebration called Lupercalia, explained NPR, in which men would beat woman with fresh bloody goat and dog hides, and then eventually pair up with them for the rest of the holiday. The women would actually line up to meet a man during the holiday, while believing that their beating would make them more fertile.

This Pagan tradition was overlapped by the martyrdom of three saints, all named Valentine, but no one knows for sure which Saint the holiday is truly based on. According to History.com, one martyred Saint Valentine secretly married lovers in the church at a time when marriage for young men was outlawed (the Emperor wanted men to be soldiers, not husbands). Another Saint Valentine left a legend of compassion, being killed for helping Christians escape torturous Roman prisons.

One of the more popular legends that still reverberates in the modern age is the account of Saint Valentine, who may have been the author of the very first Valentine. History.com explained that this Saint Valentine was imprisoned, and just before his death, he sent a letter to the jailer’s daughter that he fell in love with, signed “From your Valentine”. This could be the origin of the popular expression, now associated with the Valentine's holiday.

When the church took over, they kept the day of love and fertility from the Romans, but gave it a bit of an ethical makeover. NPR explained that in the fifth century, in an effort to get rid of the Pagan ritual, Pope Gelasius I combined St. Valentine’s Day with Lupercalia. Around the same time, the article mentioned, Normans celebrated Galatin’s day (galatin meaning “lover of women”), and because Valentine and Galatin sound alike, the two holidays may have been confused for one another.

By the 1800s, thanks to the popularity boost from Shakespeare and Chaucer, people began sending paper Valentine’s Day cards throughout Europe, and the tradition found its way well across the world, noted NPR. In the U.S., billions of Valentine’s Day cards are sent each year, and the National Retail Federation suggested that consumers in the U.S. are expected to spend over $19 billion on Valentine’s Day jewelry, flowers, candy, cards, and dining in 2018 alone.

While Valentine’s Day may have had a tumultuous and shady origin, it has really morphed into something bigger than anyone could have imagined. Not only does the holiday provide a much needed boost for the economy, it also gives people the chance to celebrate love and hope. With all the stress in the world, it’s nice to take time out to tell your loved ones you care, even if it’s with a simple gesture.

Just as the holiday has changed throughout history, the true meaning behind Valentine’s Day will also vary from person to person, and change throughout their lives. For me, the holiday has evolved into a celebration with my daughters, and although I think of it as a gesture of love towards them, honestly, the only thing they are interested in is the candy.