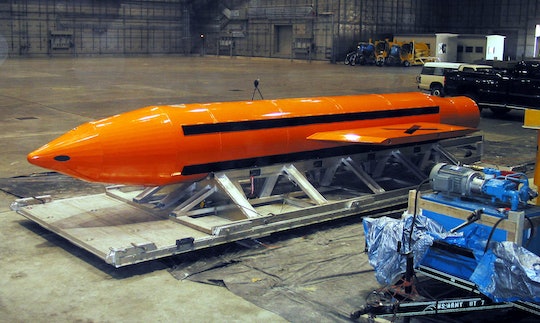 What Is The MOAB Bomb?

On Thursday, the United States deployed a MOAB bomb in the city of Achin, in the eastern Afghanistan province of Nangahar, according to Adam Stump, a spokesperson for the U.S. Department of Defense. What is the MOAB bomb? MOAB is an acronym for the weapon that's officially referred to as the GBU-43/B bomb by the U.S. military. Stump told Romper that the acronym for the 21,600-pound bomb stands for Massive Ordinance Air Blast bomb. However, it's also been referred to by its nickname — the "mother of all bombs" — given that it's the largest non-nuclear weapon in the U.S. arsenal. The MOAB bomb was dropped at just past 7 p.m. local time in Afghanistan by the U.S. Air Force, according to CNN.

Update: In a statement to Romper on Thursday, a Defense Department spokesman told Romper that officials had not "seen any reports of civilian casualties" thus far.

According to independent defense and national security information website GlobalSecurity.org, the MOAB was developed for use during Operation Iraqi Freedom in 2003 under President George W. Bush. It was first successfully tested at Eglin Air Force Base in Florida just days before Bush announced the United States was sending troops into Iraq. Even though development on the weapon was completed by 2003, it was ultimately not deployed during the 2003 Iraq War. Thursday's use of the bomb marks the first time the MOAB has ever been used in combat.

The 21,600-pound munition was dropped by a MC-310 aircraft and was guided by GPS to its target. U.S. Press Secretary Sean Spicer told reporters during a White House briefing on Thursday that the MOAB is a "large, powerful, and accurately-delivered weapon." Spicer noted that the MOAB was deployed to target ISIS fighters's "operational space," which he described was a system of tunnels and caves used by ISIS to "move around freely," allowing them to target U.S. military advisers and Afghan forces in the area.

According to CNN, the military was still in the process of assessing exact damage — but as the video of the MOAB test drop from 2003 shows, it has a widespread obliterating effect. Regarding the damage done by the bomb, Spicer said only the following, referring the press instead to the U.S. Department of Defense for further detail:

The United States took all precautions necessary to prevent civilian casualties and collateral damage as a result of the operation.

Currently, Congress is in recess, and most lawmakers are at home in their constituent states and districts. According to California Rep. Barbara Lee on Twitter, Congress was not notified about the MOAB strike before it took place. However, due to the 2001 Authorization for Use of Military Force — passed just one week after the Sept. 11, 2001 terrorist attacks — the president does not need congressional approval for military strikes to fight terrorism.

Lee urged House Speaker Paul Ryan to call Congress back into session to discuss the administration's use of its largest non-nuclear weapon and how Thursday's bombing on Afghanistan will forever shape the war on terror.