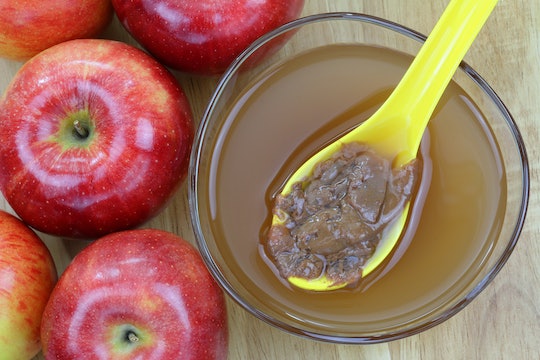 If you're like me, you've had at least 42 different friends tell you all about the amazing health benefits of apple cider vinegar. It supposedly works on everything from acne to weight loss, and I hear it even makes a great salad dressing. Alas, you've probably also heard loads about the ghost-like film floating at the bottom of the jar of your pricey raw vinegar — it's known commonly as the mother. You probably don't know much about the fermentation process, though, so what is the mother in apple cider vinegar? Strangely enough, it's not just a gross blob that you avoid like the plague when pouring your vinegar to make a chocolate cake. (I mean health tonic.)

Most store-bought apple cider vinegar (ACV) does not include the mother in the bottling process because it's been filtered and distilled out during the pasteurization process. However, if you buy raw vinegar, like Bragg's or other organic brands, you'll notice that there is a floating ball of film in the bottom of the bottle. That hazy apparition is called the mother. The mother is a complex structure of living organisms — bacteria — that work together to form acetic acid. It begins the fermentation process that alters the liquid used to make ACV into vinegar, according to The Journal of the American College of Nutrition.

The mother of ACV is very similar in nature to the scoby in kombucha or the starter of sourdough bread. Basically, all fermentation begins the same way. Bacteria begins eating at the sugar in the liquid, which converts it to alcohol, and then to vinegar. When you're making beer or wine, you work to retard this process before it hits the vinegar stage by stabilizing it. That's why if you leave wine open for a few more days than you should, it tastes like sad salad dressing and not Cabernet Sauvignon. But don't worry — you can totally drink the mother. According to the website for Bragg, you can just mix up your bottle to evenly distribute it throughout.

Fermented foods are all the rage right now, and with good reason. According to a report in the Chicago Tribune, they're experiencing this surge in popularity because of all of the documented benefits that accompany the fermentation process. They aid in digestion, help people who suffer from Crohn's Disease, chronic heartburn, constipation, diarrhea, and even something as simple as gum disease. With all of that going for it, it's no wonder people are lining up for their daily dose of yogurt and sauerkraut. Or a big gulp of the mother.

For most of us, though, fermented foods are just really tasty. My MawMaw from West Virginia would make the best sour pickles every year for us to enjoy. Using huge chunks of whatever she'd pull from her garden, she'd have the family lining up to dig into cabbage and carrot pickles that were perfectly salty and sour. My other grandmother hailed from Bratislava, and she adored old school sauerkraut. The vinegary crispy side dish was always available in her fridge, and the smell brings me back every time. Now that I'm a mom, I've started making both, as well as making my own yogurt and dabbling in fruit wines. (I mean dabbling — the last batch was basically apple lightning.)

However, these all start at the same place — the colonizing of bacteria that chows down on the natural sugars, souring the food, extending their shelf life, and expanding their health benefits. Not to mention that pickles and vinegar and sauerkraut are some of the most versatile ingredients in your kitchen. Seriously, try a little vinegar in your chocolate cake or splashed in your gumbo. Heck, you could even try making it yourself if you're so inclined and crafty.

More Like This
The Best Apple Orchards Near Upstate New York
These Oktoberfest Instagram Captions Will Get Likes & Prosts
Eden Grinshpan On Getting Your Kids To Love Fish Eyeballs (Yes, Really!)
How Much Hair Loss Is Normal? 9 Signs You’re Losing Too Much Hair