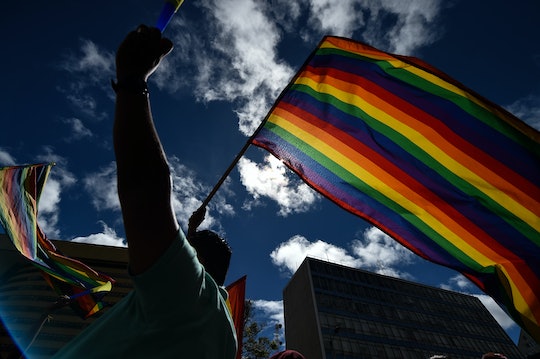 This weekend, as a catastrophic storm descended on Texas and counter-protestors staved off white supremacist rallies in the Bay Area, the Council for Biblical Manhood and Womanhood gathered in Nashville, Tennessee to talk about sex. Just not in a fun way. The coalition came up a set of beliefs during their meeting called the "Nashville Statement," which it hopes will guide and inform religious leaders across the country. So if you go to a conservative church anywhere, you might want to know what the Nashville Statement is and where you stand on it.

According to its website, the statement was created to defend the CBMW's beliefs from a "post-Christian, Western culture that thinks they can change God's design for humans." Instead of, you know, opening church doors for Harvey evacuees or issuing proclamations against white supremacy or literally anything else.

Alas, the council came up with the Nashville Statement, which was reportedly signed by 150 evangelical leaders. It's made up 14 articles, including affirmations that same sex marriage, sex outside of marriage, or gender questioning is a sin, among many other things.

It also says that marriage is not some legal contract, but a covenant with God. Oh, dear, someone please run to inform all the single mothers, married non-Christians, and the Supreme Court, which ruled in 2015 that same sex marriage was a Constitutional right.

Some background: According to its website, the CMBW was created in 1987 "primarily to help the church defend against the accommodation of secular feminism," which it believed endangered the "sanctification of married couples and [introduced] confusion about basic parenting issues such as raising masculine sons and feminine daughters."

It signed the Danvers Statement then to affirm its belief in "biblical sexuality." Thirty years later, it's now reiterating its beliefs with the Nashville Statement.

The statement "affirms" that people attracted to the same sex or those who feel "ambiguous" about their gender can lead a "rich" life, but it denies them the right to act on any "desires" or acceptance in the community. To be one with God, according to the statement, you must deny anyone, including yourself, who identifies LGBTQ. Or has sex outside marriage, by the way.

Russell Moore, the president of the Ethics and Religious Liberty Commission, the public policy arm of the Southern Baptist Convention, signed the statement over the weekend and said in a statement:

The Sexual Revolution cannot keep its promises, and the church must stand ready to receive with compassion the many who are in need of a better hope. The Nashville Statement is part of that mission, and my prayer is that it will help anchor churches and Christians to the gospel of Jesus Christ for years to come.

The statement isn't just completely backwards when it comes to sexual behavior, but it's dangerous on so many levels. If leaders adopt this statement, it opens doors for conversion therapy, which is legal in Tennessee, even though countless studies show that it increases the rates of depression, substance abuse, and suicide.

It also reaffirms some of Tennessee's current harmful legislation, such as the law prohibiting talk of "gateway sexual activity," or science-based information on preventing pregnancy and sexually transmitted diseases. Tennessee's rates of teen pregnancy are higher than the national average, according to the Centers for Disease Control and Prevention.

So far, denial and bigotry when it comes to sexual behavior, much like that in the Nashville Statement, hasn't led to better social outcomes yet. What good this new statement hopes to accomplish isn't really clear.

Instead of gathering religious leaders in Nashville to sign a new doctrine centered around a denial of some people's humanity, civil rights, and basic science, this weekend, evangelical leaders could have asked people to open their doors for the Texan hurricane victims or find ways to better bring people together in love and acceptance. Alas, religious leaders spent an entire weekend further driving communities (and families) apart.