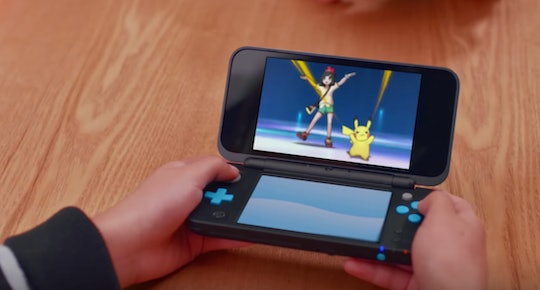 If you thought that Nintendo-mania was over once your kids got their hands on a Nintendo Switch, you may have thought wrong. The tech giant just announced the Nintendo 2DS XL, its newest handheld console and one that your children will probably want to get their hands on. But just what is the Nintendo 2DS XL, when does it come out, and how much will it cost kids who are stocking up their piggy banks in order to buy the console?

According to Nintendo, the 2DS XL fills a void between two other consoles, the Nintendo 2DS and the 3DS XL. It's a handheld device with a larger screen and, as its name hints, it only shows visuals in 2D. However, it allows users to pop in 3DS games and play them in 2D instead, for those who aren't huge fans of in-your-face visual effects, and it comes in a sleek new clamshell design. The console also features amiibo support (which allows players to get extra content or customizations in some games) and several new controls (including an intuitive camera control and ZL and ZR buttons).

Similar to the other DS consoles, the 2DS XL will feature parental controls that allow caretakers to limit what their children can access on the device, letting them control kids' internet browser use, online interaction, friend registration, and video viewing. It can also restrict kids' abilities to buy games and content on the device, and keep them from transferring photos or data. Essentially, it makes it easier to monitor your kids' behavior around the internet and technology without actually having to peek over their shoulder 24/7 while they play games.

If your son or daughter already has a 3DS XL or Switch, there's probably nothing all that new to be seen in the 2DS XL. But for those who want a low price point for a handheld console with similar features to the 3DS XL, the 2DS XL seems like a decent substitute.

Sadly, the game console isn't available just quite yet: the new Nintendo 2DS XL will be released on July 28, so if your kid's birthday is coming up soon, they may still be waiting a while before they can get their hands on the 2DS XL.