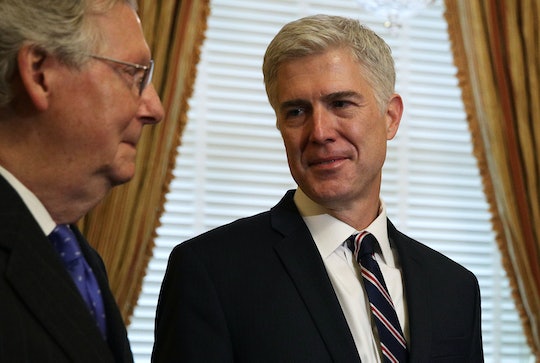 Why The "Nuclear Option" Is So Dangerous

On Thursday, Senate Republicans, led by Senate Majority Leader Mitch McConnell, set poised to invoke the "nuclear option" in order to confirm President Trump's Supreme Court nominee, Neil Gorsuch. What is the nuclear option? While the nuclear option may seem like just another piece of political jargon tossed around by legislators on the Hill. There's a reason it's called "the nuclear option" and not "the kittens and bunnies happy sunshine times votes." If the GOP goes nuclear on Thursday, as they are expected to do, the action could have disastrous long-term impacts on the neutrality of the Supreme Court for an entire generation.

While Senate Democrats successfully filibustered Neil Gorsuch's nomination on Thursday, the nuclear option is still very much on the table, and McConnell is expected to invoke it later on Thursday. For a bit of an explainer, through procedural rigamarole, debates, and a 15-hour, record-setting talking filibuster by Oregon Sen. Jeff Merkley, Democrats are trying as hard as they can to make sure Gorsuch doesn't fill Justice Antonin Scalia's SCOTUS seat. Unfortunately for the Dems, they are basically out of options if McConnell calls for a cloture vote to end the filibuster, as he is expected to do later Thursday. To end a filibuster, McConnell needs 60 votes — which he is not likely to get, thanks to 44 Democrats vowing to block the cloture.

What Happens When The Nuclear Option Is Triggered

Still with me? If McConnell passes the cloture vote, from there begins the nuclear option — the landslide of Senate precedent changes that will have lasting impacts to the future of American government from that moment on out. As FOX News noted, the nuclear option not represent a "rules change, but a change in precedent" and that "much of what the Senate does is based on precedent." FiveThirtyEight broke down the nuclear option into these steps:

The Nuclear Option Isn't New — Both The GOP & Democrats Know That, Too

In fact, the Republicans introduced the nuclear option in 2005 after Utah Sen. Orrin Hatch made a Senate rules change of his own. Dems promised to obstruct any legislation if the GOP went nuclear while trying to confirm then President G. W. Bush's judicial appointees, so crisis averted.

But Democrats basically bit themselves in the a*s when, in 2013, Senate Democratic leader Sen. Harry Reid triggered the nuclear option to confirm Cabinet appointees under President Obama. Supreme Court confirmations remained untouched by the nuclear option at the time. This is the battle Dems faced as all of Trump's Cabinet nominees have been confirmed in simple majority votes.

How The Nuclear Option Changes The U.S. Government For The Worse

How the American government functions has become exceptionally partisan in recent years, especially when it comes to Supreme Court nominee battles on Capitol Hill. While Gorsuch isn't the worst SCOTUS candidate to be nominated, he's not great, either. And in terms of Gorsuch's judicial views, he's not nearly as conservative as Scalia, so it's kind of like an even "conservative for conservative" swap on the SCOTUS bench.

But, as Kansas Sen. Claire McCaskill noted, the nuclear option could forever change the balance of the Supreme Court for an entire generation. In a recording of a McCaskill fundraiser obtained by The Kansas City Star, the TK-term senator laid it out as plainly as possible for donors:

...God forbid, Ruth Bader Ginsburg dies, or (Anthony) Kennedy retires or (Stephen) Breyer has a stroke or is no longer able to serve. Then we’re not talking about Scalia for Scalia, which is what Gorsuch is, we’re talking about Scalia for somebody on the court who shares our values. And then all of a sudden the things I fought for with scars on my back to show for it in this state are in jeopardy.

This is of course, the worst-case scenario — but when you call such an impatient, petulant, partisan action the "nuclear option," how could anything even remotely good still remain in the ashes of Senate precedent?