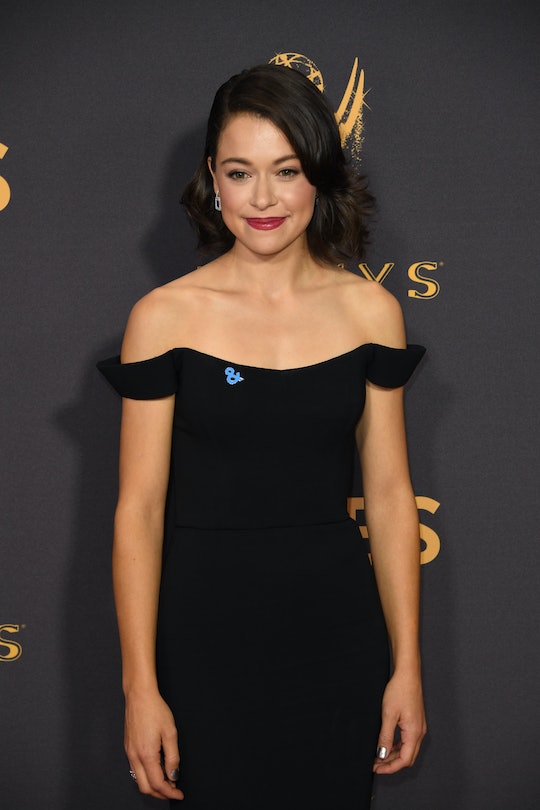 While the Emmys are all about recognizing the best of the best in television, celebs often use these red carpet events to show support for a certain cause. This year's Emmys were no different. Some people were spotted wearing ampersand pins, but what is the "&" pin at the 2017 Emmys?

Many celebs, including costume designer Colleen Atwood, were first spotted sporting the pins at the Oscars back in February. The entire cast of the Oscar-winning film, Moonlight, also wore the pins at the Independent Spirit Awards. The blue ampersand signifies general solidarity with the LGBTQ community and specifically support for the Gay & Lesbian Alliance Against Defamation, also popularly known as GLAAD.

At the Academy Awards Moonlight director Barry Jenkins explained the message behind the ampersand pins. "It's an ampersand because it's about togetherness," he said. "It's about bringing all of us together — about inclusivity, inclusiveness."

Although GLAAD specifically advocates for the rights of the LGBTQ community, the organization made it clear that this pin is for everyone, and the march toward inclusion that it represents is called the Together Movement.

"We must stand in unity and resist the forces that seek to divide us," the organization wrote on its website. "All of us. Because no one is just one identity, and many of us are under attack."

On Sunday night, Orphan Black star and Emmy winner Tatiana Maslany was spotted sporting one of the blue ampersand pins. If you'd like your own pin you can purchase one on GLAAD's website for $25; you can also get a tank, tee, and/or rally pack with the blue ampersand sign.

Another sign of solidarity that many celebs were sporting at the Emmys was the blue ribbon for the American Civil Liberties Union. The ACLU has been at the forefront of fighting for the civil liberties of the disenfranchised throughout the country for years, and it isn't surprising that celebs are showing their support. Many celebs also wore the ribbons at the Oscars and the Tonys. At the Emmys some stars spotted wearing the blue ribbon were Padma Lakshmi, Anthony Anderson, Kathryn Hahn, Riz Ahmed, Kumail Nanjiani, and Matt Walsh.

Recently award shows have become the place where celebs could really make their voices heard. People still haven't forgotten Meryl Streep's moving speech at the Golden Globes earlier this year and her call out to President Trump. Similarly, it wouldn't have been surprising if award winners discussed the transgender military ban or the president's plan to end DACA during their acceptance speeches on Sunday.

Host Stephen Colbert certainly didn't shy away from making a few jokes at the president's expense. From claiming Trump not winning an Emmy led to him running for president to noting that, unlike the presidential election, Emmys are won by the popular vote, Colbert was clearly not holding back any punches Sunday. He even brought Sean Spicer, the former White House Press Secretary, on stage in the ultimate Trump-skewering punchline.

What's great about the blue ampersand pin is that it gave those not hosting and perhaps less outspoken than Stephen Colbert a way to visibly demonstrate that they align themselves with inclusion and against hate. It's a small but significant way that the most watched people in the world, television and film stars, can use their platform for good.