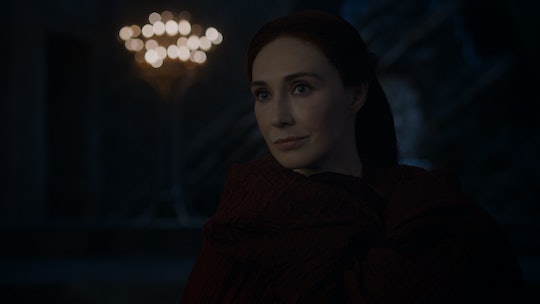 Throughout the first six seasons of Game of Thrones, there have been tons of theories that were born from both book readers and show watchers. But one that has come up even more lately is Azor Ahai from the "prince who was promised" prophecy on Game of Thrones. The whole reason Melisandre teamed up with Stannis Baratheon earlier in the series and backed his claim as king was because she thought him to be the prince who was promised, or the person to basically save the world.

Then, when he died, she saw Jon Snow through the flames at Castle Black and claimed that he was the one she’d been looking for all these years and tasked by the Lord of Light in finding. Back in Essos, another red priestess saw Daenerys as the potential princess who was promised. According to Game of Thrones legend in the books, a being named Azor Ahai ended the long night when he used a flaming sword called Lightbringer. It was because of him that the White Walkers were separated from everyone else and driven to the far north.

Now that winter has finally come on Game of Thrones again and in full force, followers of the Lord of Light, red priestesses specifically, believe that Azor Ahai will reborn as someone else in order to end the current winter and defeat the Walkers who are no doubt going to somehow make their way over or through The Wall. Since the prince who was promised is basically the reincarnation of Azor Ahai, there’s some criteria he or she has to have, although some of them are up to interpretation.

They Don't Have To Be Male

Although the translation from High Valyrian is the "prince" who was promised, it’s been said more than once on Game of Thrones that it could be either a man or woman since the language doesn’t have a different word to differentiate between prince and princess. Missandei said this in the most recent episode and earlier in the series, Maester Aemon said the same thing at Castle Black.

He Or She Has To Be A Targaryen

The prince who was promised is said to be from Aerys and Rhaella’s line of Targaryens. Aerys, also known as the Mad King, was Daenerys’ father. Since Jon is a Targaryen by way of being Rhaegar and Lyanna Stark’s son, that would make him Aerys’ grandson and his bloodline directly linked to Aerys and Rhaella too.

They Have To Be Born Of Smoke And Salt

Daenerys was born at Dragonstone, which is basically a volcanic island surrounded by a saltwater sea, so there you have the smoke and salt needed for her birth to be considered a potential rebirth of Azor Ahai. But Jon’s rebirth, after Melisandre brought him back from the dead, can also be considered one from smoke and salt. The salt would be tears of his men or the water she used to wash his body before she brought him back. And she also burned a lock of his hair, giving us the smoke.

A Bleeding Star Comes First To Herald The Arrival

The prince who was promised theory also states that a "bleeding star" heralds his or her arrival. During Season 2, shortly after Daenerys’ dragons hatched, linking her to the prophecy. In Jon’s case, when Ned went to the Tower of Joy to presumably save Lyanna, who’d just given birth to Jon, he set Ser Arthur Dayne’s sword, the Sword of the Morning, which was said to have been forged from the metal of a bleeding star, or comet, years before. This would make Jon’s literal birth under a bleeding star, in a way.

You might be able to make a logical case for more than just Daenerys or Jon being the prince who was promised on Game of Thrones, but this late in the game, it’s clear that the two characters with authentic Targaryen blood will have a big purpose in the end.