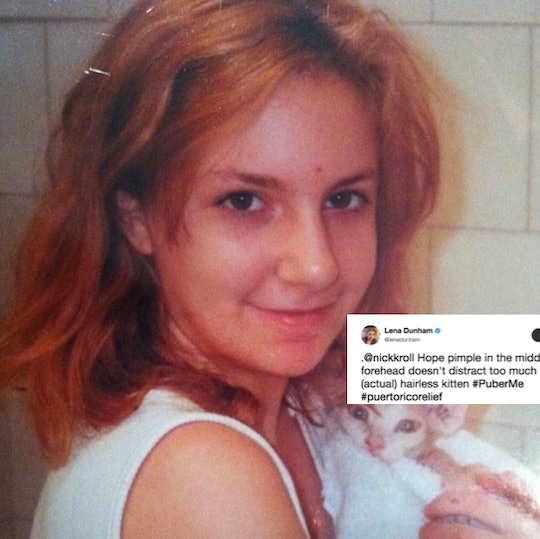 Celebs Are Taking The #PuberMe Challenge, & It Is Pretty Amazing

For most of us, puberty is an unfortunate time that we'd truly like to forget ever happened, and let's be honest, is there anything more cringeworthy than having to look back at photos of yourself at 13 years old? But thanks to a totally genius idea from comedian Nick Kroll and late-night host Stephen Colbert, it looks like photographic evidence from those embarrassing days could now actually end up helping out the relief effort in Puerto Rico. What's the #PuberMe challenge? Celebs are sharing awkward photos from their early teen years on social media for a really important cause.

The #PuberMe challenge started after Kroll made an appearance on The Late Show With Stephen Colbert Wednesday night, according to Entertainment Weekly, and argued that if everyone were more open about the reality of puberty, it wouldn't have to feel so shameful and mortifying. Kroll called on celebs to share their awkward puberty photos on Twitter in solidarity, but then Colbert took it up a notch, and pledged that he'd make a donation to Puerto Rico hurricane relief for each celebrity photo shared under the #PuberMe hashtag (a move Kroll said he would match). Not long after, the tweets started to pour in, and honestly, they're amazing.

Colbert kicked off the #PuberMe challenge on Twitter on Thursday by sharing a photo of himself at 13 years old, complete with braces and a poorly-fitting suit jacket and tie. It was a photo the host had also shared during Kroll's appearance on his show, and at the time, he gave a little context around the shot's awkwardness. When Kroll poked fun at the size of the knot in his tie, Colbert replied,

Well, I can tell you what's going on with the knot ... I'd just come from the gym, which is why my hair is wet, and I forgot it was photo day. And so the photographer, who was a 60-year-old, large man, gave me his jacket and his tie. That's why the knot is the size of my face.

Kroll had already shared an embarrassing puberty-era photo of himself during the segment, but in response to Colbert's tweet, he dug out another — and somehow, it was even better. Along with the pic, Kroll wrote, "Thank you Stephen. In return, here's me trying to look like a tough guy because I hadn't yet hit #puberme."

The movement definitely seems to be gaining traction, with a number of other celebs joining in with hilariously awkward pics of their own. There were these amazing gems shared by Ben Platt, America Ferrera, and Conan O'Brien:

While James Corden chimed in with a photo from his schoolboy days in England:

Lena Dunham shared a photo of herself and made sure to point out her forehead pimple:

While actor and comedian Paul Scheer shared a "silk on silk" photo he described as "Cirque de Soleil camouflage":

But so far, no one seems to be able to top Lin-Manuel Miranda, who upped the stakes by sharing a video of himself as a teen, singing an improvised song about returning to New York after a trip to Puerto Rico and being super bored. In the tweet, Miranda wrote, "*Dumps jar full of #PuberMe on the counter* How much does this get me for #PuertoRicoRelief?"

Clearly, Kroll and Colbert were on to something completely brilliant in suggesting the #PuberMe challenge, and hopefully it'll lead to a sizeable donation to help Puerto Rico at a time when every dollar absolutely matters. But since, for now, the #PuberMe challenge only seems to apply to celebrities, it seems like the average American might want to take advantage of some of the other celeb-backed plans to raise funds for Puerto Rico relief.

On Thursday, Beyoncé dropped a remix of the J Balvin and Willy William's hit "Mi Gente," and announced that all the proceeds would go to hurricane relief charities (she also published a list on her website of organizations to donate to). A day earlier, Jennifer Lopez and and ex-husband Marc Anthony announced the creation of Somos Una Voz, a campaign designed to raise money for Puerto Rico relief, according to CNN while Puerto Rico-born Ricky Martin has also launched a YouCaring campaign for the island (so far he has helped raise more than $1 million).

Kroll was absolutely right when he said that being more open about the struggle of puberty would help take a lot of the embarrassment and shame out of the inevitable experience, and hopefully these tweets will be super validating to everyone who sees them. But by tying the challenge into a hurricane relief fundraiser, it'll have an even bigger impact. And given that Puerto Rico is currently facing a devastating crisis, every little bit of support is extremely valuable.