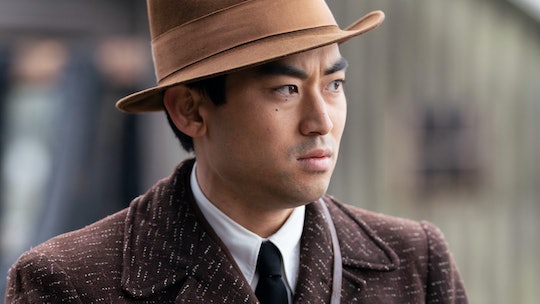 Attention Please — You Should Probably Learn About 'The Terror: Infamy'

I'm still hung up on the chilling events from Captain Sir John Franklin's lost expedition during The Terror Season 1, but AMC is gearing up for the second season of the anthology series — subtitled Infamy — and my heart is already frozen with fear. As with the first installment, The Terror: Infamy will continue to blend real-life tragedy with petrifying horror. However, due to the nature of anthologies, the new series will tell a different — but equally terrifying — tale. So what is The Terror: Infamy about? This time, the AMC show will be approaching the nightmare that was the early 1940s.

The plot of The Terror: Infamy follows a number of "bizarre deaths" that plague the Japanese-American community during World War II, according to a press release courtesy of AMC Networks. The series centers on Chester Nakayama (Derek Mio) and his family as he tries to track down the "malevolent entity responsible." That said, the true horror lies in the show's focus on the — very real — Japanese internment camps following the bombing of Pearl Harbor.

The legendary George Takei, who plays Yamato-san, simultaneously explained the premise of The Terror: Infamy while also giving a brief history lesson in an interview with Entertainment Weekly.

“[After] the bombing of Pearl Harbor, all Japanese-Americans were rounded up and incarcerated, with no charges, with no trial [or] due process, which is a central pillar of our justice system," Takei said. "There is the old Japanese literary form called Kaidan, ghost tales, that is fused onto this experience of Japanese-Americans. The people that were imprisoned were highly stressed, and some marriages broke up, some people went crazy, and they overlaid the story of yureis — spirits — and obake — ghosts that possess people."

The actor then touched on his deeply personal connection with The Terror: Infamy. When he was a child, Takei, who now serves as a consultant on the show, was imprisoned in a Japanese internment camp with his family.

“U.S. soldiers with bayonets on their rifles knocked on our door, and when my father answered it, we were literally pushed out of our home at gunpoint,” Takei told EW. "My mother was born in Sacramento, my father was a San Franciscan, and my brother and sister and I were born in Los Angeles. Yet, we had these faces. Simply because we looked like the people that bombed Pearl Harbor, we were put into these barbed wire prison camps for the duration of the war."

The Terror: Infamy also connected with the show's lead. Mio revealed the series would follow a group of Japanese Americans from Terminal Island in an interview with NBC News. "My grandfather grew up in Terminal Island, then was sent off to Manzanar, one of the camps, during the war," Mio said. "This was absolutely personal."

The Terror: Infamy clearly takes inspiration from past events, but it's just as relevant today. Takei shared how the show parallels what's happening in America right now in the same EW interview.

"When Donald Trump made that statement, ‘We’re going to have a ban on Muslims coming into this country,’ I mean that’s the same thing that happened with us," he said.

Nonetheless, the actor expressed his hope that The Terror: Infamy will remind fans of the prejudices deeply rooted within our society in an interview with Closer Weekly.

"It’s our hope that enough Americans will try to keep this from recurring to make it a better, truer democracy," Takei said.