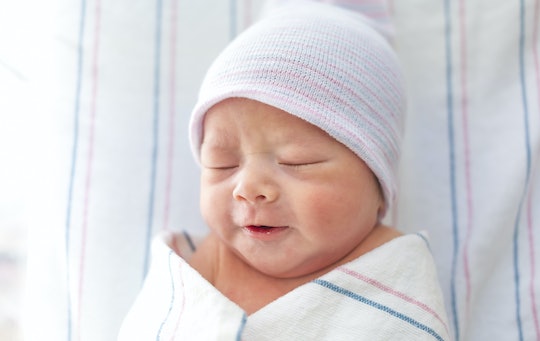 Here's Why The Vitamin K Shot Matters So Much

In the months leading up to the birth of your baby, you've undoubtedly done a lot of research about pregnancy and labor. But what about the moments that happen after birth? Immediately following delivery, you're going to have to make some decisions and it can be daunting if you haven't thought about it before, like deciding if you want your child to have the vitamin K shot. But what is the vitamin K shot? Should you research it beforehand or trust your doctor?

According to the American Academy of Pediatrics (AAP), the vitamin K shot is a standard part of your baby's after-birth care. Following delivery, the AAP noted that all newborn infants are given a single, intramuscular dose of 0.5 to 1 milligram of vitamin K. For parents who are wary of vaccines or medications, this procedure can seem unnecessary.

But Deena Blumenfeld of Shining Light Prenatal Education is a Lamaze Certified Childbirth Educator (LCCE) and Fellow of American College of Childbirth Educators (FACCE) and thinks it's very necessary. She tells Romper that the vitamin K shot is a pretty big deal for your baby. "Babies are born with low blood clotting factors, so in other words, if they bleed, they keep bleeding," Blumenfeld says. "The administration of the vitamin K shot prevents bleeding, stroke, hemorrhage, and possible death."

Blumenfeld notes that certain babies may need the vitamin K shot more than others, but it's given to all babies at birth. "1 in 10,000 babies will develop a micro-bleed in the brain during birth, which is undetectable right away," she says. "This micro-bleed can cause brain damage, which is fully preventable with the vitamin K shot." According to Blumenfeld, other babies who need it include babies born via C-section, babies born with forceps or vacuum assistance, babies who had an internal fetal scalp monitor, babies born with any visible bruising or bleeding, babies who are being circumcised or have other upcoming surgeries, if you pushed for more than four hours, and if there is any family history of blood clotting disorders.

So, can parents refuse it? Blumenfeld says yes, a parent can refuse any test, procedure, or medication. "We always have the right of informed consent and informed refusal," she says. But in her opinion, refusing the vitamin K shot is unwise. "It is a small poke and a brief ouch for eliminating the risk of brain damage or hemorrhage that is fully preventable."

The vitamin K shot maybe a standard part of the after-birth routine, but it's also really important. Talk to your doctor if you want more information about the vitamin K shot or about delaying it so you can enjoy more skin-to-skin time with your baby first.