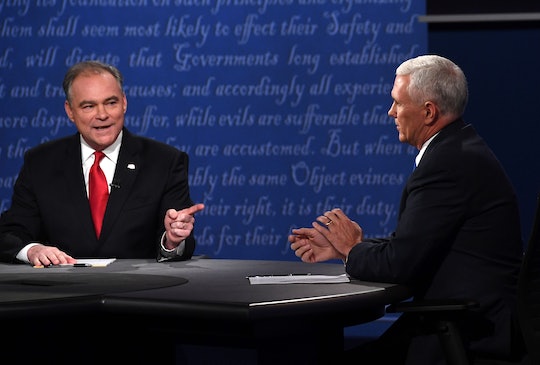 What Is Tim Kaine’s Religion? He's Proud Of His Catholic Faith

It took nearly 90 minutes to get there, but the vice presidential debate finally found its way to religion. Most people who know about Indiana Gov. Mike Pence know he's a devout Christian, mostly because he's a fan of shouting it from the rooftops. But what about the senator from Virginia? What is Tim Kaine's religion? Here's the thing; he's proud of his religion, but he goes about the issue of religion and politics in a very different way than his political opponent.

Tim Kaine is a Catholic, much like Indiana Gov. Mike Pence. The two politicians both have a history of bringing their religious beliefs to the table; Pence has been an outspoken adversary of LGBTQ rights, abortion access, and has said that he would like to bring the subject of creationism back to schools. He has proven to be a staunch conservative during his time in the office, and was has been quoted saying he was a "Christian, a conservative, and a Republican — in that order." Kaine, on the other hand, traveled as a missionary to Honduras during law school. There, he embraced a more liberated version of Catholicism that embodied social justice and reform. According to The New York Times, Kaine said in an interview: “I’ve been very plain about my time in Honduras and about how important my own spiritual life is to me as my big motivator in this."

During Tuesday's debate with Mike Pence, Kaine talked about how his faith would affect the way he governed. He admitted he had been personally opposed to the death penalty as governor of Virginia, but that as a politician, it was his civic duty to uphold the law. In his time as governor, Kaine oversaw 11 executions, despite his personal opposition.

During Tuesday's debate, Kaine said that he "tries to practice his religion in a very devout way, and follow the teachings of the church in my own personal life." He went on to say that he did not believe that "the doctrines of any one religion should be mandated over anyone."

So, sure, both of the candidates are religious. But that's where the similarity ends. When the subject of abortion was raised, pro-lifer Mike Pence continued to attempt to defend an earlier quote from Donald Trump, who said that women should be "punished" for having late-term abortions. And Tim Kaine was simply having none of that. He asked Pence the most pivotal question in the abortion controversy:

Governor, why don't you trust women to make this choice for themselves?

Why, indeed? If ever there was a mic-dropping moment in the surprisingly interesting vice presidential debate, that might have been it. Tim Kaine, a devout Catholic, supporting a woman's right to choose. That pretty much says it all.