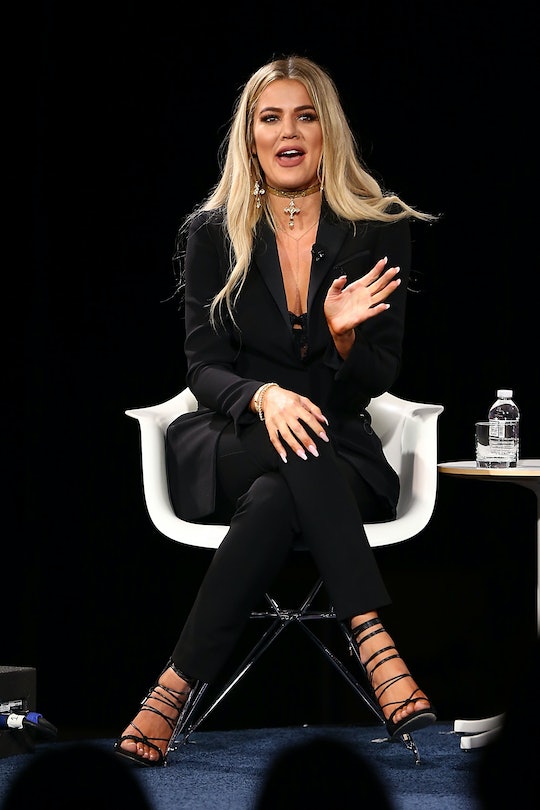 After months of speculation, fans finally know Khloé Kardashian's baby's name, and it is seriously sweet. Mama Khloé shared the baby's first and last name on Instagram, but fans still don't know what True Thompson's middle name is. Judging by the reports on True's name, and the Kar-Jenner family's tendency to stick with just a first and last name, she may not have one.

Kardashian shared a photo on Instagram on Monday of a room drenched in pink, along with a caption that announced the baby's name. "Our little girl, True Thompson, has completely stolen our hearts and we are overwhelmed with LOVE," she wrote. "Such a blessing to welcome this angel into the family! Mommy and Daddy loooooove you True!" The announcement didn't come with a photo of the baby herself, but judging by the numerous balloons and flowers, it looks like she got quite the welcome home.

True's grandma, Kris Jenner shared her own post of a bunch of pink balloons to Instagram, congratulating her daughter and Tristan Thompson on the new addition to the family. Her post also provided a bit of background on True's name. “I’m so excited to welcome my precious little granddaughter True!!! FUN FACT… my Grandfather’s name on my Dad’s side was True Otis Houghton, she wrote. "….my Dad’s name was Robert True Houghton…so i [sic] am so excited Khloé named her daughter True!!!" Neither of the posts included a middle name.

As you've probably noticed, Kardashian opted to give her daughter Thompson's last name. There was some speculation that she would not do so following the recent allegations that Thompson has been unfaithful (Thompson's and Kardashian's reps didn't immediately respond to Romper's request for comment regarding the allegations). However, a source close to the couple reportedly told People that Kardashian chose True's last name as a show of solidarity with Thompson:

While Kardashian and her sisters all have middle names of their own, many of the younger members of the family do not. For example, none of Kim Kardashian's children have middle names — North West, Saint West, and Chicago West are their full legal names. Kourtney Kardashian did choose to include middle names for her children: Mason Dash Disick, Penelope 'P' Scotland Disick, and Reign Aston Disick. Rob Kardashian used a middle name when naming little Dream Renée Kardashian, but Kylie Jenner did not, making Stormi Webster her daughter's full name, according to Elle.

Chicago West's lack of a middle name was revealed to the public when TMZ published a photo of her birth certificate. As no birth certificate for True has been released as of yet, there is a chance that True has a middle name, but Khloé and Tristan have just decided not to share it with the world yet. But the official announcement made on Khloé's app seemed to share all of the details of birth — including her birth weight (six pounds, 13 ounces) and length (21 inches) — but no middle name can be found there either.

There are still no available photos of baby True, who was born on April 12, but it may not be long until fans get their first glimpse of the littlest member of the family. Like any good celeb, True already has her own Instagram account (yes, really), so she may make her big debut there. In the mean time, Khloé and Tristan seem to be enjoying parenthood privately for the time being. Good for them.