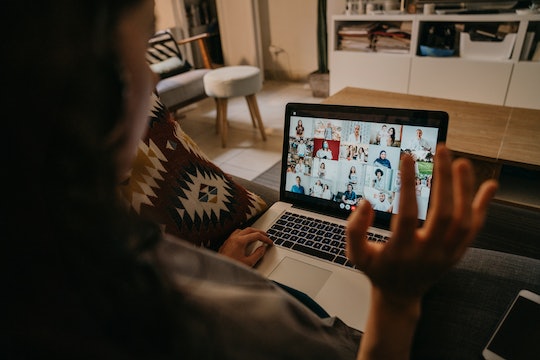 People all over are burning out on Zoom because of their (involuntary) reliance on the video conferencing platform to connect with people for both personal and professional reasons during quarantine. So what is Zoom fatigue, and what can you do to manage or even avoid it? You might not be able to ditch video calls entirely, but there are ways to cope with this new standard of communication.

If you find yourself dreading your next video meeting or telehealth appointment more than you would otherwise, you're not alone. This is happening because weeks and weeks of these kinds of interactions have left you drained. As therapist Dayry Hulkow M.S. tells Romper, "nothing beats meaningful human interaction in real life... virtual meetings, however useful, may not be as stimulating or satisfying as meeting face-to-face." Social worker Kathryn Smerling Ph.D. agrees, telling Romper that virtual meetings are "more like a lecture than a face to face, which can be energizing." And counselor Kellie Wicklund M.A., LPC, PMH-C, explains that "on Zoom, you have to emote and physically and facially gesture more to get your emotion across the screen," because you're not in a shared environment with other members of the meeting. "It's tiring to emote and gesture with more energy over a sustained period of time," she says.

All of that emoting, gesturing, and interaction takes a lot out of a person. It's even worse when you're tasked with managing your kids' virtual meetings as well as your own. Nicole J., a teacher in Raleigh, North Carolina says that in a typical week, she has one 2-hour team meeting for work, regular lessons to teach, and several "office hours" for her students. In addition, her husband's job requires him to be on calls "all day," and since she brings in "supplemental income," she's "in charge of [the] kids and their education as well." She has three kids, one that has two mandatory Zoom meetings a week (as well as several other optional sessions), two that have several optional meetings per week (which she says attendance dwindled significantly over the weeks), and various extracurricular video meetings for activities like dance class. "We were honestly drowning at first," she admits. Over time, she says, her family's expectations began to adjust, but as an introvert the lack of privacy is tough. "I feel much more of a need for quiet time, which is nearly impossible to get with three kids at home," she says.

It's not only introverts who are feeling this way, either. "Zoom meetings can be equally exhausting regardless of such traits," Hulkow says. Part of this, she explains, is because it's "difficult or even impossible for the brain to differentiate between 'work' and 'play' if it is all done through a screen within the same room from home." To combat this, she recommends keeping "designated areas for 'school' or 'work' separate from common areas best suited for play or a 'safe-private' space."

Wicklund points out another reason why virtual meetings can be draining: self-consciousness. "Often you can see yourself in one of the windows, and can start thinking about how you look or how your environment is being seen, wondering of someone in the family will barge in at anytime," she says. "It's tiring to be in this sustained self-conscious state, which can also feel performative and exaggerated." Not to mention, personal video chats come with the "expectation that it would be enjoyable," and when it doesn't live up to that expectation it "can leave you feeling disappointed."

Right now, there's not much you can do to reduce the number of Zoom meeting requests you get, but Hulkow advises setting "appropriate boundaries for [yourself] and the people around [you]." It's okay to say no, and it's okay to prioritize things like fresh air, says Smerling, "especially as the weather is getting better."

No matter what, you need to prioritize self-care. "Mental health matters now more than ever," says Hulkow. "It should take precedence... simply put, the mind drives the body and [your] survival depends on it." This is especially important for parents because, says Dr. Smerling, because "they can't give themselves to their children" if they have nothing left to give. She continues, "It's important to do something for yourself, even if it's taking five minutes alone for a long shower or bath."