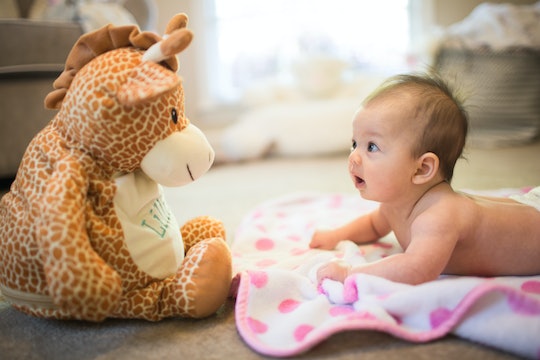 What Does It Mean If Your Baby Is Already Holding Their Little Head Up?

When my son was born, he was one of the most alert newborns I had ever seen, and the nurses said so, too. Looking back, I think it was a sign of the horrific sleepless months to come because he stayed so alert and never wants to miss anything ever. Total FOMO. He was so curious, he was already basically holding his head up within the first three weeks. We’d try to snuggle him and he’d be trying to scan the place. Back then, I was definitely wondering what it means if your baby is already holding their head up.

Dr. Gina Posner, a pediatrician at MemorialCare Orange Coast Medical Center in Fountain Valley, California, tells Romper that some babies are just born with strong necks and it doesn’t necessarily mean anything good or bad. “Most babies by one month are holding their head up briefly and they are definitely holding their heads up briefly by two months. I would consider it ‘early’ if they are holding it up before one month,” she tells Romper.

Dr. Robert Hamilton, a pediatrician at Providence Saint John’s Health Center in Santa Monica, California, and author of 7 Secrets of the Newborn adds, “Children who are able to lift their heads up (with their chin clearing the surface they are on) earlier than one month of age would be considered precocious in this regard. However, that said, I have seen very young children, when they are crying intensely, lift their heads and even roll over at one-two weeks of age.” Hamilton adds that he doesn’t think there are really any specific “abnormalities,” including any oral issues, that would cause a child to lift their head earlier than normal children. “The only possible exception to this is a baby with gastroesophageal reflux disease [GERD] who is experiencing chest pain as a result of regurgitation into the lower esophagus. Known as 'heartburn' in adults, infants who experience [GERD] arch their backs in pain,” he says.

So what about the opposite situation? What if your kid still hasn’t quite mastered lifting up their head? When should you be concerned? "Newborn head control, like all motor skills, is learned slowly," explained Mama Natural. "Babies learn to use their neck muscles by practicing, just like learning to crawl and walk, though head control happens much quicker than the other milestones."

“If by 2 months they aren’t holding their head up at all, I would talk to the pediatrician," says Dr. Posner. "We also look at how well they are holding it by 4 to 6 months."

“Children who are not lifting their heads well by three months of age would be a red flag to me," adds Dr. Hamilton. "I would consider them as a candidate for further evaluation by a pediatric neurologist.”

So it looks like my kid just had some pretty strong neck muscles at first, and I still think it's because he always has to know what's happening at all times and doesn't want to miss anything. Hence why nap time is still a horrible struggle to this day and he's 15 months old. If your kid can do it early, don't worry, it's usually not a sign of something serious, unless they're arching their back and that's causing them to lift their head. Then you may need to get your baby evaluated by a pediatrician to rule out GERD.

More Like This
Here’s What You Need To Know About That Viral 1960s Baby Formula “Recipe”
First Look: The New Jujube x Lilo & Stich Collaboration
Here's When Your Baby Might Start Sleeping Through The Night For Real
The Baby Formula Shortage Is Impacting Real Families & Hospitals