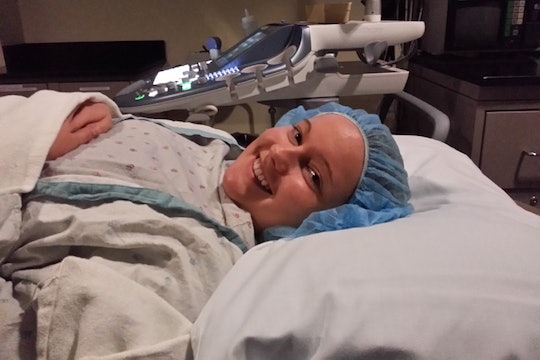 I Went Through 3 Rounds Of IVF, & Here's How Much It Costs To Have A Baby

In this installment, a mother looks at how much it cost to conceive a baby through years of fertility treatments.

I know that having kids is expensive. There’s clothes, diapers, toys, education, and countless other things you didn’t even anticipate. But for my husband and I, to even conceive our child was the really mind-blowing expenditure.

I went through six years of infertility treatments and one of the most stressful aspects was financing it all. There were many calls to the insurance company, calls to the billing department and a lot of tears because so much of the process wasn’t going our way. Infertility is being talked about more and more in our society, but so many people still don’t understand just how expensive it can be. And if you are thinking we’re crazy to be spending our savings to have a child, please think for a moment if your children were no longer in existence. That ache you feel in your heart? That’s what people struggling with infertility deal with every day.

We’re in debt now, but our little girl was worth every penny. Here’s how much it cost us out of pocket to have our child after infertility.

I went to see my OB initially in 2012 because I wasn’t getting pregnant and it had been right around the one year mark of us trying ourselves. We had pretty good insurance and paid low office and medication co-pays. Around $80 of the $240 went toward copays of Clomid, a fertility medication that helped my body ovulate. However, the result of all of that was nil.

We started at our fertility clinic in December of 2012 and luckily, our insurance covered $10,000 lifetime max of fertility treatments and $10,000 lifetime max of medications for each of us. Our very first intrauterine insemination (IUI) was canceled on Christmas Eve because it appeared I had ovulated early. For that cycle, we still owed $170 with medications and office visit co-pays. We were still able to complete three cycles of IUI, but they were not successful. In June of 2013 we moved on to in vitro fertilization (IVF).

We used what was left of our insurance coverage and began dipping into our savings account, excited about the possibilities IVF would bring that our inseminations couldn’t do.

We took out a loan against my husband’s 401K, with promises to pay it all back interest-free in five years.

After paying for doctor visits, medications and testing, we only wound up with a small number of eggs they were able to surgically retrieve from my ovaries. Of those, we were left with one embryo to transfer back into my uterus. Unfortunately, while I initially became pregnant, we ended up losing that baby in an early miscarriage. We met with our doctor after that and did some blood work. One of my tests showed there was a possible issue with my egg quality, but no one seemed too concerned at this point.

As our insurance coverage for infertility ran out, we decided to pursue our clinic’s guarantee program, which meant, if we were approved, we would be able to have up to three IVF cycles bundled together in one cost. If at any point, we didn’t take home a baby, or if the company decided they wanted us out of the program, we would be reimbursed the full amount — all for the cost of $19,000. Since we obviously didn’t have that enormous amount of money sitting under our mattress, we took out a loan against my husband’s 401K, with promises to pay it all back interest-free in five years.

That cycle once again brought forth a pitiful amount of eggs retrieved and only one embryo which didn’t take. It was becoming more and more apparent that we were dealing with an egg quality issue, but since we were still on the guarantee program, it was on to the next cycle.

Cycle number three lasted a solid five months as I started dealing with some health issues from the medications and my cycle was initially canceled until everything could get figured out.

That cycle ended up being a bust and we were gracefully kicked out of the money-back guarantee program.

We completely changed up the protocol and our doctor threw everything he had at us — but we still only ended up with one embryo to transfer when all was said and done. That cycle ended up being a bust and we were gracefully kicked out of the money-back guarantee program, getting back all $19,000 that we could put toward the next cycle.

We ended up finding a clinic across the country that we could do a frozen donor egg program through, where we would obtain a certain amount of eggs that were donated anonymously from another woman and frozen in the clinic’s egg bank. After the consultations, testing and paying the giant $15,210 bill that we pulled directly from our savings when we were refunded the $19,000 from the guarantee program at our previous clinic, we flew down south to try our first donor egg cycle.

Initially, after I had two embryos transferred, I was getting faint lines on my home pregnancy tests. But alas, once again, it was not meant to be, and it was determined this cycle had ended in another early loss. We didn’t have any embryos left over, and once again, we were left empty-handed.

Further testing revealed some genetic disorders (one of those tests yielding a price tag of $400) and we decided with the remaining money we had (which sadly wasn’t much) we would do one final cycle. We had one last cycle, and if it didn’t work, we would live our lives without children. It was a thought that kept me awake some nights.

Luckily, our doctor at this clinic had his own guarantee program and we were able to knock about $6,000 off the price of this donor egg cycle. We chose a new donor, went on new medications, and transfered two embryos, one of which became our daughter in March of 2015. Our doctor monitored my pregnancy for 12 weeks before I was released to my OB-GYN.

Being able to take a loan out of my husband’s 401K was the only thing that was able to let us move forward growing our family. Insurance definitely helped, but it wasn’t much, a story others experiencing infertility know all too well. The reimbursement we received from our first clinic before moving on to donor eggs was also a saving grace.

We’ve been slowly paying down the loan, now almost four years out with another year still to go. We live paycheck to paycheck, and are struggling to not only add to a savings, but we need to save for another donor egg transfer. We have three frozen embryos waiting for us to use them, and are looking at another $7,000 for the chance of another baby. Infertility is not only an emotional experience, but it’s an expensive one.