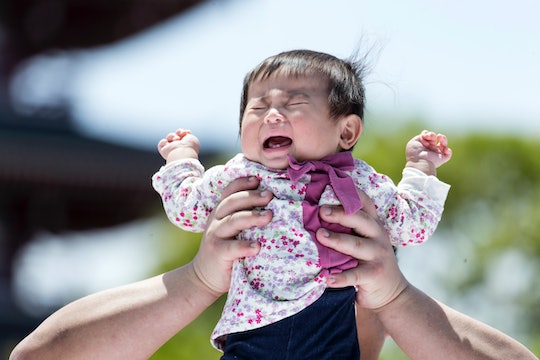 What Kick Count Says About Your Baby's Personality Might Not Surprise You, TBH

Expectant moms have a lot to keep track of during those long nine months — their weight, their diet, the baby's movement — and a lot of time to wonder about the little person growing inside. Will my child be a genius? A star? Or the kid that everyone charitably calls "energetic" when they really mean Tasmanian Devil? While no one can predict beyond all doubt, there are a lot of theories (both scientific and not-quite) about how you can tell a baby's personality from its activity level in utero.

I remember that my firstborn's movements felt more often like slow ripples around my belly than active kicks and thrashes, and after he was born, he remained a mellow baby (although now he's turned into quite the vigorous drum player!). My second pregnancy was marked by lots more restless movement, so maybe I shouldn't have been surprised when my daughter was the curious sort who hated staying in a bouncer for long. (At her three-month checkup, her pediatrician called her "nosy" because her head never stopped looking around.)

During pregnancy, it's important to keep track of your baby's movements, beginning at around the 28-week point. The recommended method is to lie comfortably on the left side (which increases blood circulation to the fetus) and time how long it takes to record 10 distinct kicks, rolls, flutters, or other signs that the baby is moving. Ideally, the mom should be able to count 10 kicks within two hours every day, which indicates the baby is healthy and not under stress. If the kick count goes below that twice in the same day, or if the movement slows down after being consistent for several days, that's a warning sign that should be reported to the OB (or the mom's maternal care provider) ASAP.

But do those kicks and twitches mean anything, other than that the baby is doing its equivalent of a fetal Zumba class? Surprisingly, the answer may be yes. For instance, one of the many old wives' tales surrounding baby gender is that if the baby is more active in the womb, it's a boy, but that girls are more sedate in there. Odd as it sounds, there may be some truth to that myth. A study published in the journal Developmental Psychobiology found that boys moved their legs more than girls, both before and after birth. (Then again, another study of pregnancy and birth in the U.S. and Peru found no difference between the activity level of either gender.)

Fetal movement may also hold a clue to what the baby will be like once it's born — but gender may play a part in it. Johns Hopkins researcher Janet DiPietro has conducted several studies on the connection between fetal movement and child behavior, also published in the journal Developmental Psychobiology. She found that increased fetal movement was linked to more active post-birth behavior in boys, but that girls who were more restless in the womb were actually less active once born. Both genders were more likely to be easily frustrated as infants if they were active before birth, but they were also more likely to interact with toys and with strange adults before their second birthday than children who were more mellow pre-birth.

Furthering the activity/temperament link, Israeli researcher Shimon Degani studied sets of twins from pregnancy to infancy. The results, published in the Journal of Perinatology, found that each twin who was more active in utero tended to be irritable and nonadaptive at both 3 and 6 months, according to their mothers' observations.

Your own emotions during pregnancy can also have an effect on your babies' activity level, it seems. One interesting Japanese study reported in the Journal of Physiological Sciences tracked babies' movement in the womb after their mothers watched a happy film and a sad one. Though the babies' movements didn't change significantly during the sad film, they waved their arms more frequently during the happy movie.

Of course, there's a lot more work to be done before we know for certain how a child's personality is formed before birth. Still, it's interesting to keep in mind if you're expecting. If it feels as though your baby is constantly practicing tai kwon do moves in your belly, consider yourself warned: You might have a restless little explorer on your hands in a few months.

More Like This
Are Boy Babies Usually Late? Signs Your Baby May Be Born Late
Are You Leaking Amniotic Fluid Or Is It Normal Discharge? Experts Explain
20 Bridgerton-Inspired Baby Names
Rainbow Baby Shower Ideas To Celebrate A Very Special Baby