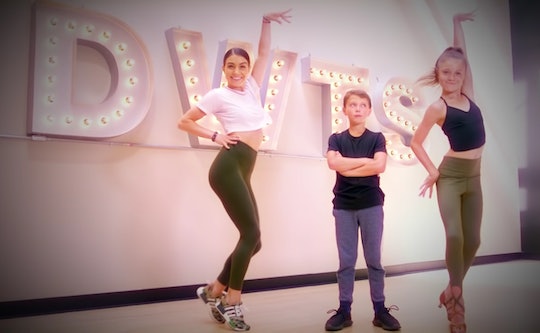 12 Young Stars Are Dancing To Win On 'DWTS Juniors'

The 12 contestants include a spelling bee competitor, a professional skateboarder, several actors, a chef, and even a star from a legendary reality show. (It's Honey Boo Boo! More on that in a moment...) Each kid is partnered up with a young professional dancer, ranging from 10 to 15 years old, and each duo is mentored by a Dancing with the Stars pro or troupe member, ET Online reported.

The show, which premieres on Sunday, Oct. 7 at 8 p.m. ET on ABC, will be hosted by actor Frankie Muniz and actor and DWTS winner, Jordan Fisher. The three judges are figure skater and DWTS champion Adam Rippon, choreographer Mandy Moore (not to be confused with Mandy Moore from This Is Us), and DWTS pro Valentin Chmerkovskiy, according to ABC's website.

Okey-dokey, here are the 12 Dancing with the Stars: Juniors contestants.

Addison won MasterChef Junior when she was just 10 years old, making her the youngest competitor — and first girl — to ever win the show, according to her ABC bio. She is partnered with young professional dancer Lev Khmelev, and dancer Keo Motsepe is mentoring the pair.

Alana, aka Honey Boo Boo, became a viral celebrity when she was on Toddlers & Tiaras in 2008, according to her ABC bio. She subsequently got her own reality show, Here Comes Honey Boo Boo, so she's definitely comfortable in front of cameras. Alana's partner is Tristan Ianiero, and their mentor is Artem Chigvintsev. Is it too early to share my support for Honey Boo Boo?

In 2016, Akash made history as the youngest boy to ever compete in the Scripps National Spelling Bee, when he was just 6 years old, Business Insider reported at the time. The little genius will be dancing alongside Kamri Peterson and under the mentorship of Witney Carson.

If your kid is a Disney fan, you may have seen Ariana on Disney's Stuck in The Middle. But more likely, you've seen her starring in A Bad Moms Christmas and Marvel's Avengers: Infinity War. Dancer Brandon Armstrong is mentoring Ariana and her partner, Artyon Celestine, according to ABC.

At just 10 years old, Hudson is already an accomplished actor. He stars as Jake Spencer on ABC's General Hospital, and he's also had roles on American Crime Story: The People v. O.J. Simpson, Grace and Frankie, Modern Family and Grey's Anatomy, as noted in his ABC bio. Hudson will be boogieing with Kameron Couch, and Hayley Erbert is mentoring the kiddos.

Jason is best known for starring in Raven's Home, Disney Channel's spinoff of That's So Raven, according to his ABC bio. Jason and dancer Elliana Walmsley will be dance partners, under the mentorship of Emma Slater.

If Mackenzie's last name rings a bell, it's because she's the younger sister of Maddie Ziegler, Sia's muse. Both Ziegler gals starred on the reality show Dance Moms a few years back, according to Us Weekly, so Mackenzie definitely won't be out of place on Juniors. Mackenzie, who is also a singer/songwriter, will be partnered with Sage Rosen, and their mentor will be Gleb Savchenko, as per ABC.

Mandla has grown up very close to the spotlight — and that's because his dad is Stevie Wonder. Yes, that Stevie Wonder. According to his ABC bio, Mandla is an aspiring fashion designer. He'll be dancing with Brightyn Brems, and they will be mentored by Cheryl Burke.

Miles stars as Jack Johnson in black-ish, and he's also appeared onThe Thundermans, Shameless, and Raising Hope, according to his ABC profile. Miles will be grooving with partner Rylee Arnold, under the mentorship of Rylee's older sister Lindsay Arnold, a DWTS pro.

Sky is a 10-year-old professional skateboarder who uses her platform to inspire young girls to get into sports. "Girls can do anything and we shouldn’t care what people say. Just do it and have fun," she told Teen Vogue earlier this year. Sky will be skating across the dance floor with JT Church, and Alan Bersten will mentor the pair, according to ABC.

Sophia has worked professionally in the fashion industry, and her biggest credits include becoming the face of Oscar De La Renta Kids, and walking at New York Fashion Week, her ABC bio explained. She is also the daughter of Scottie Pippen, the NBA star, and Larsa Pippen, an entrepreneur. Sophia is paired up with Jake Monreal, and Sasha Farber will mentor the duo.

Tripp is the grandson of Sarah Palin and the son of Bristol Palin, who herself once competed on Dancing with the Stars. Both women make a cameo in Tripp's intro video, and they seem very excited that he's following in his mom's footsteps. As per his ABC bio, Tripp's partner will be Hailey Bills, and DWTS: Athletes champ Jenna Johnson will mentor them.

I don't know about you, but I can't wait to cheer on all these kids (but mostly Honey Boo Boo) when the show premieres.