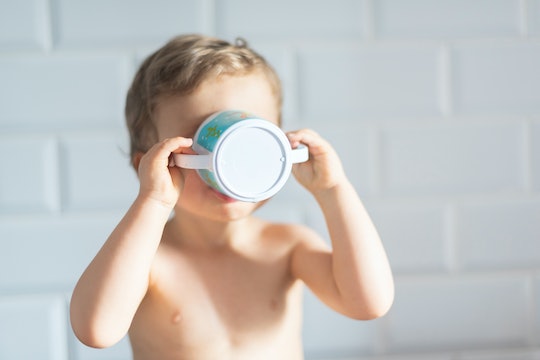 What Kind Of Cup Should Toddlers Use? Experts Explain

One milestone in my child’s life that I was weirdly excited for was graduating from a bottle to a toddler cup. No more washing bottles by hand and warming up milk? Yes, please. I was overwhelmed at first — I wasn’t sure what kind of cup toddlers should start with. There were straws, spouts, 360-degree lids, and everything in between. That’s a lot of options, y’all. What was best as far as spill prevention and ease of use, what would be best for his development, and what age could I finally get started? So. Many. Questions.

Pediatrician Gina Posner tells Romper that you should start introducing cups between 4 and 6 months of age, and she recommends the cups with the flat top to start. “I like these because they teach them how to drink from a regular cup better and still prevents the spills,” she says. “They are great for helping learn how to drink from a regular cup and don’t hurt the teeth.” Posner adds that you can also try the straw sippy cups, but to stay away from the ones with the spouts. “The ones with the spouts are OK, but you want to get rid of them early on — by around 12 to 15 months — to teach them how to use a regular cup,” she says.

Echoing Posner, speech language pathologist Melanie Potock adds that unless there’s a medical need for a spouted sippy cup, you should stay away from those all together. “Kids can learn to drink from a straw as early as 6 months of age, or more typically by 8 months. There are so many options for low-spill straw cups that it just makes sense to introduce cups that support feeding development." She also says that open cups and straw cups are both ideal for mouth development and helping facial structure form as nature intended, but it's crucial that the straw is short. "The tip of the straw should just reach the tip of the tongue when the tongue is resting inside the mouth.”

Potock adds that some parents may opt to teach their children with a longer straw at the beginning, but once the skill is mastered — within a week — slowly trim the straw to a shorter length. “The short straw will allow the tongue tip to rise up during swallowing, rather than pushing forward as if the child were still bottle feeding,” she says. “This mature swallow pattern emerges at about one year of age, and thumb sucking, extended bottle use, and spouted sippy cups may prevent the important stage of feeding development.”

Pediatrician Daniel Ganjian also suggests that parents stay away from cups that have BPA and/or soft nipples. But generally he recommends a cup that your child will actually take is best. “You have to try with different shapes, nipples, and colors, and hope that your child will like one of them,” he says.

Once your toddler has mastered the sippy cup, they may be like mine and constantly want to drink out of “Mama's and Dada’s cup.” He tries, but is still not quite successful and it spills all over his front. When should toddlers developmentally be ready to use a cup without a lid? Posner says that it depends on the child. “They can drink decently around age 3, but I have some patients who are doing well at this at age 1, and some that still have trouble even at age 3.”

Posner adds that if by age 3 they’re still having a hard time drinking from a cup without a lid, you should just mention it to your pediatrician. But until then, it’s best to teach them with a 360-degree cup or a cup with a small straw.