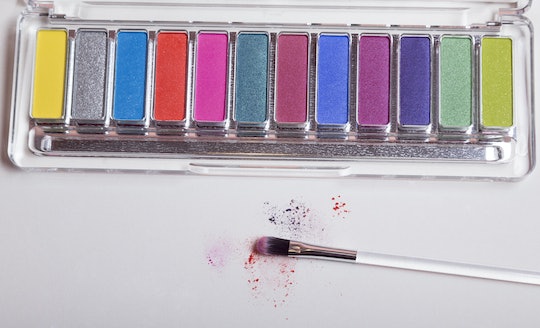 If Your 8-Year-Old Wants To Wear Makeup, Here's What You Should Know

My 6-year-old daughter is in love with the beauty vloggers on YouTube and she watches them all the time. She especially loves when the vloggers are kids and teens with their own makeup routines. But when it comes to her own face, she has a kid's makeup kit she plays with as she watches me get ready — that's as far as it's gone. It's just play to her. But some kids are more interested in real makeup as they enter their almost-tweens. If your child is dabbling, you might wonder, "What kind of makeup is appropriate for an 8-year-old?" Those plastic makeup brushes can only go so far.

I remember I was in the sixth grade when I really started wearing makeup. It wasn't just because I thought it was fun, but that was the year of puberty for me. My skin was red and full of spots and I'd somehow gone from lustrous baby face to scaly tween overnight. It was as much about preserving my own self-esteem as it was about self-expression. I remember some really interesting choices that I made in regards to color and sheer amount of makeup I used, too. Thankfully, I was also in theater, so finding someone to help me learn the ropes wasn't difficult.

But this wasn't my first foray into the world of makeup — it's just when I got serious with it. In prior years, I'd donned my Bonnie Bell lip smackers and roll on glitter with the joy and abandon that only tweens can pull off. It wasn't a great look, but I thought it was aces.

Thankfully, our kids won't be growing up in the era of appropriated bindis (thanks, Gwen Stefani) and iridescent and scented lipstick, fun as those things were. Although now we have Kardashian contouring and lashes so thick it's a wonder we can open our eyes, so maybe it's not actually any better.

As my daughter starts wanting to wear more outside the home, it's going to be a judgement call. What kind of makeup is appropriate for an 8-year-old to wear? Just gloss? Maybe blush? Full-on emo Marilyn Manson?

According to a study in Sociology Compass, our perception of attractiveness and self-worth is driven by how we perceive the input around us. If your child is being bombarded by kids wearing makeup, and you're a heavy makeup wearer (and I'm practically a drag queen, if I'm being honest) than your child will likely want to experiment younger. The researchers argue that agency over appearance is an important piece of self-identification and growth.

In Personality and Individual Differences, scientists argued that a child who is given more bodily autonomy, not necessarily related to appreciation of beauty and standards thereof, but not opposed to such, experiences higher rates of subjective wellbeing, which they define as consisting of "emotional responses (high levels of positive and low levels of negative affect) and judgments of overall life satisfaction."

If autonomy and agency are such crucial parts of childhood growth and experience, allowing your 8-year-old to dabble with some forms of cosmetics seems good if that's what they've found interest in. However, if it doesn't feel appropriate to you to let them wear it out, that's a personal choice. Jan Faull, MEd wrote for Parents magazine that there is no standard — it's what the parent deems appropriate based on their gut. So while you might let them go full Kylie Jenner at home, you might only allow them to wear lip balm or sparkles when you leave the house.

I called one of my many makeup artist friends from the theatre department at Brooklyn College, Madda Aziz, and asked her how kids can safely play with makeup. She says that speaking just on how young skin reacts to makeup, you'll want to steer clear of anything lash-related. "They have beautiful, delicate lashes that will be damaged by mascara or curling. It's best to avoid it." Mascara was honestly one of the first things I wore as a kid, and I remember feeling distinctly like I had spiders on my eyes.

"As long as they're going to wash it off, because kids' skin is really delicate, most everything else is fair game. It's just a different form of art, and some kids are really into it. You do want to make sure they wash their hands and utensils as well as avoid putting anything near their eyes," Aziz says. She adds that the best removers for kids are often good old baby wipes followed by a gentle baby shampoo.

If your 8-year-old really wants to wear something out of the house, Aziz suggests Rosebud strawberry balm. Not only is it moisturizing and healing, it smells fantastic and gives just enough shine to be noticeable, letting your child feel like they're wearing something special. "Plus it comes in a gold tin that looks cool when you pull it out." As a long time user of strawberry balm, I agree 100 percent. That stuff is magic, and your 8-year-old will think so, too.