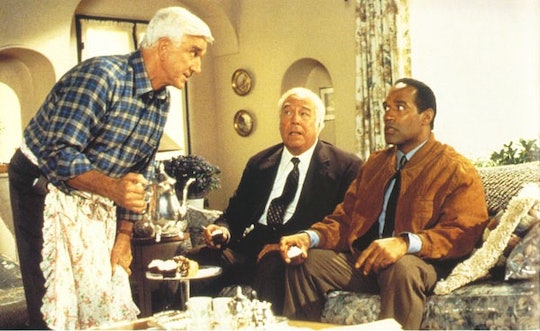 What Movies Has O.J. Simpson Been In? He Really Tried To Make It As An Actor

When you hear the name O.J. Simpson, you tend to think up images from his famous 1994 trial (where he was found not guilty) or, if you are of the younger variety, scenes from the recent FX hit, American Crime Story: The People v. O.J. Simpson. In that case, you probably see Cuba Gooding Jr. in your mind rather than the famed football player-turned actor-turned accused murderer. Yep, Simpson was intent on being an actor, but you aren't alone in asking, what movies has O.J. Simpson been in. That's right, O.J. Simpson was trying hard to build some sort of movie career and although he will likely never be remembered as a movie star or even an actor, the proof is in his would-be career in show business.

Of course at the time of his trial, O.J. Simpson was well known for his Hertz commercials and for being a football superstar, but there had always been a part of the charismatic camera-ready man that obviously yearned for stardom on the big screen. And, believe it or not my fellow young millennials, he definitely made it in some capacity. But what movies was O.J. Simpson in? Unsurprisingly, none of O.J. Simpson's movies were cinematic classics and hits like those in the Naked Gun series, but damned if Simpson didn't give it all he had. Even if it wasn't much.

You know how when an athlete guest stars in a TV show or makes a cameo in a movie, even if you don't realize they're a famous football or basketball player, you can usually tell that they are because of their awful acting chops? The lines delivered in the most cringe-worthy of ways? I won't say O.J. Simpson was as bad as an athlete showing up on an after school special, but a huge movie career he did not make, even with several movies like these under his belt.

Simpson appeared in The Towering Inferno, alongside Steve McQueen and Faye Dunaway, so it wasn't a bad group to be cast with. Based on a novel, almost the entire movie centers around a fire in a huge office building and the people inside trying to get out. You know, kind of like a Michael Bay film in the '70s.

Think of this as an Oceans 11 before (and after) its time. The Diamond Mercenaries is about a group of jewel thieves trying to pull off some crazy diamond heist.

Taking pretty much any role you're offered has its perks. Especially for Simpson, when he got to work with Martin Sheen in The Cassandra Crossing. The movie is like a Contagion-esque scenario, except everyone who is infected is stuck on a train speeding through Europe.

This one actually sounds kind of good. It's about the cover up of a faked NASA mission and also stars Elliot Gould and James Brolin in his heyday. OK, so we don't exactly talk about this movie today, but it had to have some value in its time, right? Right?

O.J. Simpson had a pretty big role in Firepower, about a fugitive on the run and the several people after him for different reasons. Yes, a fugitive. We can't even make up the irony in that.

As a crime drama spoof, The Naked Gun did everything right. It even got in a cameo of an attractive former pro football player who would go on to appear in both of its sequels. Is it a timeless classic today? Well, it remains high ranking on both IMDB and Rotten Tomatoes, which currently has it at at 86% fresh rating. So there's that.

Obviously Hollywood can't just quit while they're ahead, like ever. Sequels are the stuff that can either totally ruin a movie or leave people wanting yet another one. In this case, it just makes you appreciate the first movie on its own. With the same sort of humor and pretty much the same cast, The Naked Gun 2 1/2 grossed about $8 million more than its predecessor, but remains slightly inferior to the original.

Simpson starred with Kris Kristofferson and a young Drew Barrymore in this thriller mystery about the death of a teenage ballerina and the sister she left behind, who becomes a target herself. Is it the stuff Oscars are made of? Probably not, but you have to give O.J. Simpson props for getting in on another movie with some pretty decent leads.

When you've got two movies making close to $100 million each, you have to add a third and make a trilogy, right? Luckily for O.J. Simpson, he was welcomed back a third time to the Naked Gun franchise, reprising his painful role as Nordberg, best friend and partner to Leslie Nielsen.

Obviously O.J. Simpson's movie career wasn't super expansive or even impressive, but that seemed to be his goal for the better part of his career during and after football. In fact, he was trying to break into big time acting right up until his trial in 1994.

More Like This
Ray Liotta’s Fiancée Shares Heartbreaking Tribute One Month After His Sudden Death
Sea Monsters, Pandas & Everything Else Coming To Netflix In July 2022 For Families
10 Of The Raddest Movies From The '90s To Watch On Girls Night
20 Of The Best Movies To Watch This 4th Of July