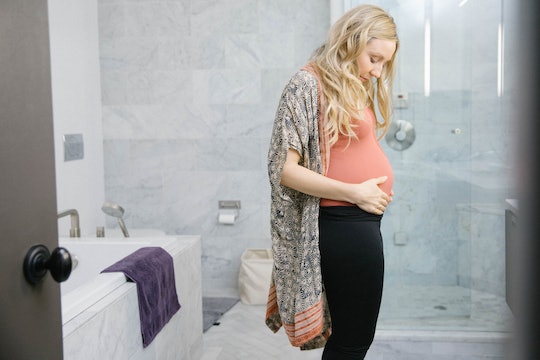 What You Should Know About Being Pregnant After A Miscarriage, According To OB-GYNs

Pregnancy is an exciting and miraculous thing that, while perfectly common, never ceases to be attached to feelings of wonderment that the human body can, well, grow another human. But it also comes with concerns about what foods to avoid, activities to pursue, and even correct sleeping positions. And if you have previously suffered a miscarriage and find yourself pregnant again, then you have the added weight of worrying about a reoccurrence. You may wonder, “What precautions do I need to take during pregnancy if I had a miscarriage before?” The truth is, miscarriages occur in 10 to 15 percent of known pregnancies, according to the March of Dimes, and there is often nothing you could have done to prevent it — but that doesn’t stop you from wondering. Experts say there actually are a few things to consider.

“The majority of miscarriages happen in the first trimester — the first 12 weeks of pregnancy — and are usually due to genetic or chromosomal abnormalities within the pregnancy,” Dr. Aaron Styer, OB-GYN and reproductive endocrinologist with Colorado Center for Reproductive Medicine in Boston, tells Romper in an email interview. “Genetic abnormalities usually happen by chance and are not usually due to any type of daily activity or dietary intake.”

Dr. Jaime Knopman and Dr. Sheeva Talebian, co-founders of TrulyMD and OB-GYNs at New York's Colorado Center for Reproductive Medicine, explain that this is where “why” and “when” behind a pregnancy come into play. “If the miscarriage occurred because the embryo was genetically abnormal, then your body was sort of doing what it needed to by spontaneously miscarrying the pregnancy,” they say in an email interview with Romper. “However, if you miscarried in the later part of your pregnancy — the second trimester — and it was due to cervical shortening or preterm labor, then you may be a candidate for early interventions such as twice monthly cervical length checks, modified bed rest, a cerclage (cervical stitch), and/or intramuscular progesterone shots each week from 16 to 36 weeks.”

Of course, if you have had two or more miscarriages in your lifetime, then you should also consult with your OB-GYN or fertility specialist to test for genetic or autoimmune abnormalities, or possible abnormalities of the uterus which may increase risk for recurring miscarriages, Styer says.

Dr. Lakeisha Richardson, a Mississippi-based board-certified OB-GYN, tells Romper she also recommends that women who have previously experienced miscarriage see their physician for a preconception exam to rule out any red flags, such as bacterial infections, prior to conceiving. She also recommends women abstain from several lifestyle choices, like smoking and drinking, that have been associated with miscarriages.

According to WebMD, pregnant woman should also be sure to take at least 400 milligrams of folic acid every day, beginning at least one to two months before conception if possible. Regular exercise, a healthy diet, reducing stress, maintaining a healthy weight, and staying up to date on immunizations are also important steps that might help prevent miscarriage.

And it can’t be stressed enough — it’s OK to be nervous and even feel anxious about appointments with your doctor. Conceiving after miscarriage can be scary, but you are not alone in this journey. Talk to your healthcare provider, even if you aren't pregnant yet, about how you can best manage the fears associated with a pregnancy after a miscarriage and what, if anything, you can do to keep you and your baby safe.