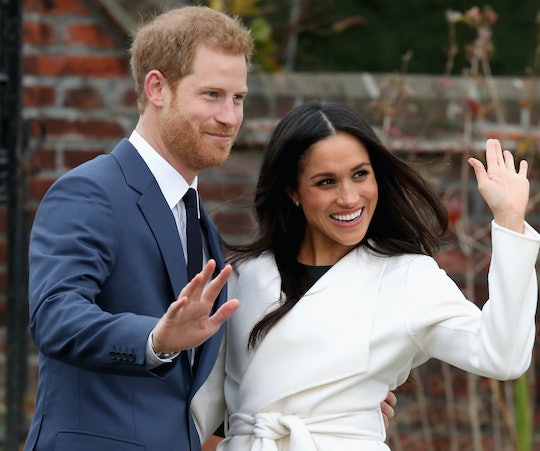 What Prince Harry & Meghan's Markle Wedding Date Says About Them, According To Astrology

As the world waits to witness the royal wedding of Prince Henry of Wales and Meghan Markle, all eyes are on the fairytale couple. From wedding guests to the number of bridesmaids to who will walk Markle down the aisle, everyone wants to know the details of this once-in-a-lifetime affair. Thankfully, there are more than a few things Prince Harry and Meghan Markle's wedding date says about them, according to Astrology, and every little tidbit of information can help us paint a picture of the nuptials to come.

More Like This
Meghan Markle & Prince Harry Donated Cute Beanies For Archie’s 2nd Birthday
Prince Harry & Meghan Markle Once Met Up & Flirted At A Supermarket
Prince Harry’s Famous Dad Friend Warned Him About Paparazzi In Their Neighborhood
“He Is Hysterical”: 12 Of Meghan & Harry’s Cutest Quotes About Archie

Prince Harry and Markle are set to be married on March 19, 2018, at Windsor Castle in England. The wedding date will fall under a Taurus Zodiac sign and, according to Modern Wedding, May 19 is actually a very lucky date. "The Chinese believe that any date that ends in an eight or a nine is particularly lucky, as eight symbolizes infinity and nine represents fulfillment." The date falls under Taurus as Uranus enters after seven years in Aries, which is, according to YourTango, "logical, deliberate, and slow-moving."

While it's a great sign for building a strong relationship that will last, it's also the sign of the bull, so the two lovebirds could butt heads on occasion. Astrologer and psychic medium, Suzie Kerr Wright, tells Good Housekeeping the date is unique as far as planetary alignment goes, adding that it could mean the two "will spend the next seven years creating innovative solutions to problems in the world. They're focus will be on solving the Earth's problems with resources and homelessness."

To understand just how the stars may align for the royal couple, it's important to look at their individual Zodiac signs. Markle is a Leo, a fiery sun sign, and Prince Harry is a Virgo earth sign. The two signs don't exactly make a perfect match on the surface, but Astrologer and life coach, Linda Joyce, tells Cosmopolitan that why the couple's competing astrological signs matter — especially on this wedding date — "they are very good at presenting their strengths to the world and hiding the rest."

Leos, like Markle, love the spotlight and can handle any attention directed their way, which means she's primed for the royal life. And while their union is sure to be a steamy one, full of passion, Prince Harry will act as a grounding partner to Markle's fire. Astrologist Kathy Biehl tells In Style that he "enhances her private side," adding that, "her Mars in Cancer is on the cusp of his marriage house, which brings a nurturing love. It indicates an intense connection that’s unshakeable." In other words, Prince Harry "delivers the security, love, and acceptance she has needed all her life.”

Interestingly enough, the Moon will be in Cancer, which is Princess Diana's star sign, and represents family, motherhood, warmth and adoration, according to Elle. Venus moves into Cancer around the time the couple says "I do," too, bringing love, romance, beauty, aesthetics, and wealth.

Aside from the moon's placement, this wedding date also has a few other planetary influences. Saturn, for instance, found its way back to its home sign of Capricorn, where it'll stay until 2020. For Prince Harry and Markle, this means slowing down and assessing progress, according to Astrology.com. Jupiter's full moon in Scorpio is also a time for — once again — slowing down. And finally, Venus in Gemini will allow both parties clarity as they look back on their journey together, realizing they're at the pinnacle of their relationship. All of this will help them connect on a deeper, more intellectual level.

Whether or not you believe in the power of the Zodiac, one thing is clear: the cosmos have aligned in a way that makes Prince Harry and Markle's relationship a truly spectacular one to witness. It's written in the stars.