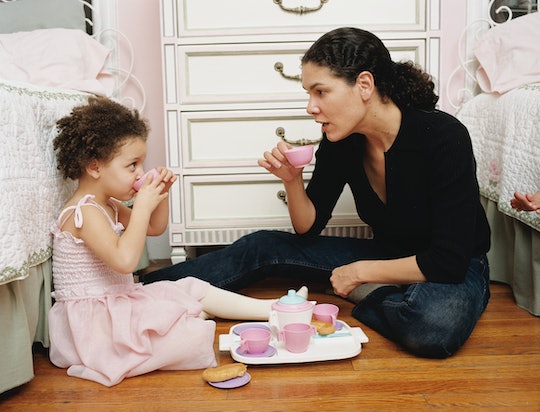 This Is What Quarantine Looks Like For Hispanic Moms

The pandemic has been hard on everyone, but continues to impact black and Hispanic communities disproportionately, and mothers of small children are especially feeling the effects. While 37% of mothers with children 3 or under said that it had been harder to juggle responsibilities with schools closed and the economy on hold, the share of mothers feeling the crunch grew to 50% among Hispanic moms, according to “Motherhood in the Age of COVID-19,” a survey conducted by Romper and the Clinton Foundation's Too Small to Fail early learning initiative. “Being at home with a toddler and working from home is not easy at all,” explained one mother. “She requires 95% of my attention, and the work I do get in is when she’s napping.”

The survey, which canvassed 2,000 mothers across the country, found that mothers of young children are a load-bearing segment — they are filling in for childcare and school, often working from home, or attending their jobs as essential workers, and managing household duties, not to mention offering support (if remote) to elderly parents. That’s a lot of stress.

Among Hispanic moms, the stress was even higher, but the survey also found enormous resilience in Hispanic moms and communities.

Seventy percent of Hispanic respondents were "very worried" about their parents getting COVID-19, against 58% overall. This finding reflects a demographic reality. Latinx and Hispanic households are often multigenerational (up to a quarter are, as reported by NBC in 2014). The disparity between rates of COVID in wealthy New York City neighborhoods and working-class neighborhoods has been traced in part to multigenerational living arrangements — Elmhurst, a neighborhood in Queens that is 64% Latino and where 11% of households are multigenerational, has seen the highest rates of infection in the city, per a FiveThirtyEight analysis of ProPublica data. Culturally speaking, adult Hispanic and Latinx children often shoulder the responsibility of caring for their parents as they age, with 35% of Hispanic grandparents live in households run by the parents (or rather, their own children), per Census data.

Hispanic moms are also very concerned about being unable to pay their bills (50%) or their partners being furloughed (49%), economic fears borne out by the April stimulus package, which came up short on helping Latinx and minority businesses.

Another major concern on the minds of Hispanic mothers (66% of those surveyed) is the potential to receive poor healthcare due to hospitals being overloaded — a reality at Elmhurst Hospital — followed closely by the thought their children might get COVID (63%). The other major concerns have to do with finances. Sixty percent fear the economy going into a major depression — a very real fear that some are reporting as inevitable while others are stating otherwise. Hispanic moms are also very concerned about being unable to pay their rent or their mortage (51%), being unable to pay bills (49%), or their partners being furloughed (49%), economic fears borne out by the April stimulus package, which came up short on helping Latinx and minority businesses, and the dismal numbers being reported regarding job and income losses for Hispanics in places like New York City.

On top of all of that, 34% percent of Hispanic moms surveyed said not being the parent they want to be is causing them “a lot” of stress. What that means varies from mother to mother, of course, and it’s possible that some of these moms were already struggling with these thoughts prior to the COVID-19 pandemic. Twenty-eight percent of hispanic moms also reported feeling guilty about offering too much screen time, 26% felt judged for their parenting choices, 29% worried about their kids fighting.

“They need my attention all of the time and it's hard to juggle cooking, cleaning, and also working eight hours,” said a mother with an 8-year-old and a 9-month-old baby. Thirty-one percent said they are spending more than two hours of additional time planning for children's activities and learning each day (28% are spending 1-2 hours more, and 23% are spending up to an hour more).

One of the major findings of the survey was that Hispanic moms are managing these extraordinary circumstances very well. While 53% of Hispanic moms said their role has been harder overall since the pandemic hit, 15% said managing their responsibilities was actually easier for them now, and 32% reported that there hasn’t been much of a change.

Around 40% of Hispanic moms seem to be OK with their parenting, even if it's less than ideal. Their responses reflected both the burden of caring for young children all day and the resilience they’ve demonstrated in calming the waters. For one mother, a successful tactic had been taking her kids outside “with exploration in mind” each day, “getting them excited about what they are doing and making a plan to just keep the activities in order ... so they know what to expect coming up.” Planning a schedule had been key for many, including one who also noted that “stress levels seem to skyrocket when I think too far ahead.”

The way Hispanic moms are coping may have to do with community: 47% of these moms feel that other parents in their community have been supportive of one another since the stay-at-home orders were issued. “Keep your head up, you’re doing an amazing job, mama,” wrote one respondent in a note of encouragement for others. “You are doing the best you can,” advised another mom. “You have no one to impress. Love your children, it’s OK if the house is a mess, you are surviving something that we haven't ever come across before.”

They were also grateful for the extra time with their children that the pandemic has forced. Compared to pre-COVID-19 times, mothers overall reported spending more time talking with their children (78%), reading together (70%), and singing (just over 63%) with their little ones. They also admitted to spending much more time engaged in math activities, playful learning, and on art projects together. "My kids always looks forward to the next day's activities on the board," wrote one mother. "[It] keeps them motivated."

It is undoubtedly tough right now, but our survey revealed a powerful cohort of mothers. “We can do this! We are strong and we can tackle any obstacles,” wrote in one respondent. In the text of her answer, she used a muscle emoji.

You can view all of the findings from "Motherhood in the age of COVID" here.

This article was originally published on May 8, 2020