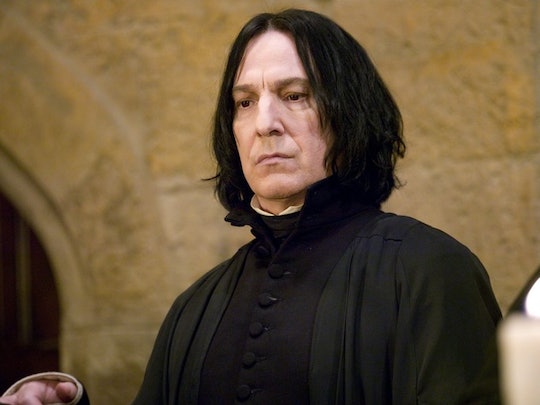 What Severus Snape Taught Me About Being An Outsider

Harry Potter was the first film I ever saw Alan Rickman in. I was 14 years old at the time, and I didn't really pay too much attention to Rickman's casting in the film. If I'm honest, I wasn't even sure how I felt about Harry Potter then. I was an Anne of Green Gables type of person, and I didn't really care for fantasy, especially magic. Later, I'd watch Rickman in Robin Hood, Love Actually, and Die Hard, and I'd finally get it. In each film I was absolutely so blown away by his ability to bring characters to life, especially the more sinister ones. Eventually I found my way back to Harry Potter as a 19 year old. By then the final book had been released and I'd became a full blown HP fan. I read each of the novels over and over. I stopped whatever I was doing at my parents' house whenever there was a Harry Potter marathon on TV. And as I turned each page and shifted between scenes on the screen, I fell in love with Snape because he was human, Rowling's brilliantly crafted anti-hero. I watched him in the Harry Potter franchise films, and I discovered just how magical Alan Rickman was.

I grew up in a gated, white suburb, and being a black girl in that type of community always made me feel awkward, out of place more often than not. People were constantly assuming things about me. White people would make jokes about me not really being black because I liked to read, and I didn't talk like most black people they saw on TV. Black people would make fun of me for not being "black enough" like them. I always just felt like I existed in an in between place of not really being one thing or another. Which I didn't understand.

Like me, Snape was very much an outsider. He was raised to view the magical world one way, not realizing that his Pureblood ideals separated him from his peers. He dressed and looked a certain way and was fascinated by a subject matter that very few of his peers cared for. Snape didn't fit it, but more clearly, he didn't know how to fit in. He wasn't Pureblood enough (even though that's how he identified), and he didn't understand it was OK to be part Muggle. As I got older, I realized that our stories, though the settings and the characters were different, were very much the same.

Snape felt as real to me as the reflection I saw staring back at me in the mirror. I wanted to tell him it'd be OK, that we'd be found, because telling him would be like telling myself. And if I could take care of him, then I'd be OK too.

I loved the complicated relationship between Snape and Lily Potter. And I love that she gave him the gift of kindness. Because it was Lily's kindness ultimately saved Snape from his own darkness — and it was her kindness that saved Harry again and again

Snape was the outstanding example of how kindness can really impact a person's life. It's something we all encourage children to remember, but only in my adulthood did I realize just how important leading with kindness truly was. We know we should be nice, but we don't really understand the strength or power behind it. Snape, though there were moments when his actions were rude and rooted in hatred, was a reminder of what kindness can do for a person; how kindness can change the course of a person's story. I know because it changed mine.

I've also always loved Snape for his complexity. His character was such a realistic example of what it meant to be human. I think too often we want to limit people to boxes with a label or two, we want to reduce them to be smaller than what they are. Yet we're all made up of so many different experiences, stories, heartbreaks. Alan Rickman brought these complexities to life. He gave Snape the right to be a man who was far from perfect, and in doing so, he gave Snape soul, heart, and depth.

He brought Snape to life in ways I don't think we were expecting. He showed us a person who was tormented, broken, sad, but still fiercely loyal and capable of love. He showed us that being an outsider isn't sad or pathetic. He made me believe that my differences were a point of pride for who I was as a person. Snape saved Dumbledore. He saved Harry. In lots of ways, he saved me, too. Even though he didn't dispense love the way we're most comfortable seeing, he showed us that love is a Many-Faced Thing. It was his greatest lesson, and I'm lucky to have learned it alongside him.