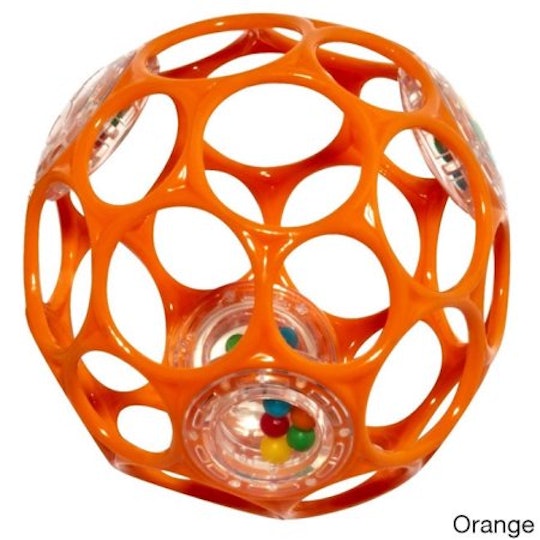 What Parents Should Do With Recalled Oball Rattles

On Thursday, child toy company Kids II announced a massive recall of its Oball rattle, citing a choking hazard. According to the manufacturer, the clear discs on the ball have been prone to break, releasing the small, colorful beads inside. The recall affects nearly 700,000 baby rattles sold between January 2016 and February 2017 in the United States. Since the recall was issued, many have asked what parents should do with recalled Oball rattles. The U.S. Consumer Product Safety Commission (CPSC) recommends parents call Kids II to receive a full refund. Kids II did not immediately respond to Romper's request for additional comment.

Kids II recalled its green, orange, pink, and blue Oball rattles with the model numbers 81031 and 81548 after it received 42 reports from parents about the plastic disc defect, according to the CPSC. Rattles that have the dates codes T0486, T1456, T2316, T2856, and T3065 are also part of the recall. The CPSC noted that you can find the model number in the inside of one of the three plastic discs, while the date code could be found on a small triangle on the inner surface. If you have an Oball matching any one of those five-digit numbers, you should call Kids II toll-free at 877-243-7314, during normal business hours, in order to request a full refund. The same applies for parents living in Canada, where 17,000 Oball rattles were sold. The CPSC also encouraged parents to report any incidents involving the Oball baby rattle — or any child's toy for that matter.

This is not the first recall for Kids II. The infant toy manufacturer has issued 12 other recalls over the last two decades, according to its website. The items included bouncers, jumpers, teethers, and crib toys. The bulk of the recalls happened between 2004 and 2008, with multiple recalls occurring in 2005, 2007 and 2008. The last time Kids II voluntarily recalled a rattle product was nine years ago, when the Georgia-based company pulled its Bright Stars Ring Rattles from store shelves. According to the CPSC, Kids II recalled that brand of rattle because of a choking hazard (the tip of the antenna would detach from the rattle).

The federal government has strict guidelines for toys marketed to children under age 3. But there's an exception for rattle products; under Title 16, Chapter II of the Code of Federal Regulations, toy rattles are exempt from the "banned hazardous substance" rule if "the rigid wires, sharp protrusions, or loose small objects are internal" and if the rattles are "constructed so that they will not break or deform to expose or release the contents." Other baby products exempted include, but are not limited to, dolls, stuff animals, and bouncers.

Although infant toys are vigorously tested, some products may not present a danger to children until after they are released to the public. Before buying a rattle or another toy, parents should take caution and research for previous recalls, when possible. The more you know, the better you can guard against hazards.