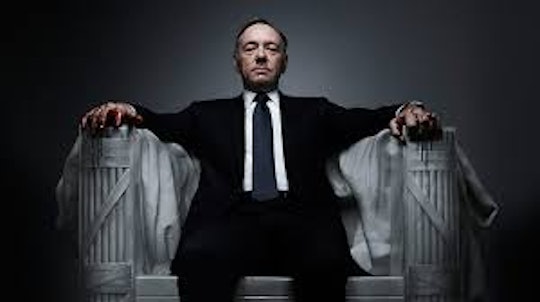 'House Of Cards' Introduces A Song With A Special Meaning

Warning: Episode 1 spoilers ahead for House of Cards Season 5! There are so many evocative images from House of Cards that stay with me long after I'm done watching. Claire Underwood smoothing down the skirt of her impeccable dress, Doug Stamper with a syringe and a prostitute (I'll spare you the details, but you know you remember). It's a series of small moments that capture you more than the big events. President Frank Underwood is the King of small moments... take the little diddy he was humming to himself during Episode 1, for instance. Not everyone would recognize the song Frank is singing on House of Cards Season 5, but it carries a weight of its own significance.

After an especially tough day at the funeral of Jim Miller, who was beheaded by ICO insurgents on American soil, Claire and Frank Underwood retreated to the Oval Office for a little Machiavellian alone time. Plotting wars, planning on manipulating regular Americans, you know the drill. The two spent some time on the terrace, literally looking down on their fellow Americans lining up at the gates of the White House. After Claire leaves, Frank bums a smoke off of one of his security detail and starts to softly hum a tune. An especially meaningful tune. "I Wonder What The King Is Doing Tonight" from the Broadway musical, Camelot.

The musical was adapted from the legendary T.H. White novel, The Once and Future King. As most of us know, it's the story of King Arthur, a boy who grew from Merlin's apprentice (or "Wart" as he was once known) to become King of England. The musical featured the song "I Wonder What The King Is Doing Tonight?" sung by Arthur. The opening lyrics feel particularly meaningful to Frank Underwood in Season 5 of House of Cards:

The song choice really couldn't be better to set the tone for Season 5; Frank and Claire Underwood, now running mates for the 2016 presidential election as well as husband and wife, spent much of last season trying to curry favor with the American people. Campaigning, glad-handing, trying (in vain) to beat Governor Conway at his own game, only to come up short. And now? Now they are summoning the dragons. The veils are down, the guns are drawn. They have separated themselves from the American people, Frank in particular discovering he's content to rule from atop his ivory tower. Looking at his subjects through the scope of a gun.

The subjects who should, most certainly, be wondering what their King is up to tonight.