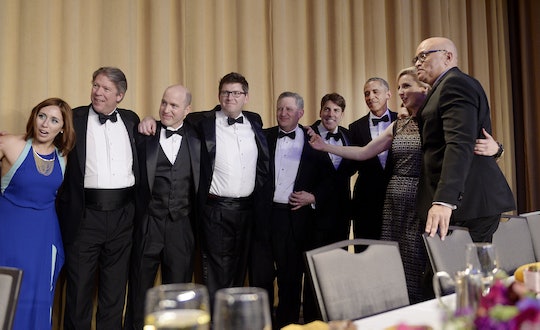 How The WHCD Honors Journalists Of All Ages

As the 100th day of Trump's presidency draws near (never thought you'd see the day, huh?), so does the annual White House Correspondents' Dinner. The event, hosted by the White House Correspondents' Association, is held at the Washington Hilton every year and honors journalists and members of the free press. But just what sort of awards are given out at the WHCD? The WHCA honors several journalists, as well as journalism students, at the event, as well as traditionally pokes some fun at the current administration.

As you've likely heard, though, this is the first time in 36 years that the president himself will not be in attendance, as President Trump has announced he will be attending a rally for himself in Pennsylvania instead of going to the dinner. But that doesn't mean that the night will be any less special. In fact, the WHCA is planning to award three journalists who have exhibited excellent coverage of the White House's affairs this past year. This year's winners are Greg Jaffe of The Washington Post, Edward Isaac-Dovere of Politico,and David Fahrenthold of The Washington Post, according to the WHCA website. The scholarship winners, on the other hand, amount to a grand total of 23 winners, all of whom will be recognized at the dinner as well.

The winners of the journalism awards each get a different award for different reasons. There is the Aldo Beckman Memorial Award, the Merriman Smith Award for outstanding White House coverage under deadline, and the Edgar A. Poe Award. All three awards represent varying areas of journalistic coverage and the winners were selected for a plethora of reasons.

According to the judges, the Aldo Beckman Memorial Award is being awarded to Jaffe based on his ability to demonstrate "how profound the political divide has become with the starkly different reactions of two Americans to Obama's final State of the Union address," among other reasons.

As for Dovere winning the Merriman Smith Award, the judges cited his coverage of "the historic press conference of President Barack Obama and Cuban President Raul Castro," which "demonstrated the importance of having reporters on the ground." And Fahrenthold was chosen for the Poe Award for his "display of investigative reporting at its best," in reporting Trump's philanthropic activity.

Whether the winners are from nationally-circulated publications, or are student-journalists from Syria (as is one of the night's scholarship winners), they are clearly all deserving of the recognition garnered from the WHCA. Journalists have an important job, especially in Trump's America, and they deserve a night to celebrate that.