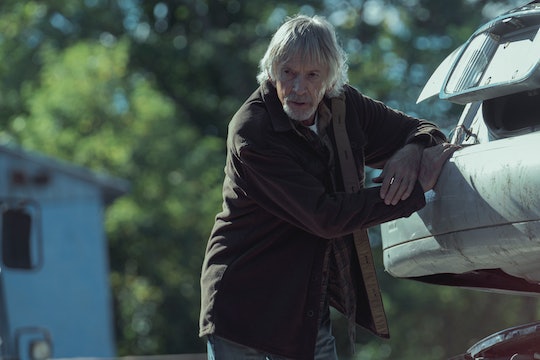 Hulu’s Castle Rock is inspired by the works of Stephen King, and features a number of references to locations, events, and characters from his novels. King’s fictional town of Castle Rock and Shawshank Prison have been adapted into the show, and so has King character Alan Pangborn, played by Scott Glenn. In the show he's the town’s ex-sheriff who has seen his fair share of horror. But exactly what Stephen King books does Alan Pangborn appear in?

According to King’s Fan WIkia Page, Alan Pangborn has been featured as a main character in two of King’s novels. He was first introduced as the sheriff of Castle Rock, Maine in the 1981 novel, The Dark Half. In the book, Pangborn investigates the mysterious murders committed by Thad Beaumont’s murderous alter ego George Stark. In 1991 (the same year Henry Deaver goes missing on Castle Rock) his character reappears in Needful Things, where he battles the demon shop owner, Leland Gaunt who tricks the residents of Castle Rock into selling him their souls. Pangborn is also mentioned by name in three of King’s other works, including the novella The Sun Dog in 1990, his novel Gerald’s Game in 1992, and Bag of Bones in 1998.

So of from all the characters in King’s novels, why did the Castle Rock creators choose to feature Pangborn? In an interview with The Hollywood Reporter, showrunners Dustin Thomason and Sam Shaw revealed their love for King’s work, how it inspired them, and why they felt the need to revisit Pangborn’s character. “I think he's a character that we loved from the novels,” said Thomason. “We were really interested in the idea of seeing when Pangborn might be a kind of lion in winter. Just as we were bringing Castle Rock into the modern era, we also wanted to see what it felt like to check back in with someone like Alan Pangborn, and we felt like he was a character that you could put in a really interesting position in the middle of this very strange story that we're telling in season one.” Shaw added that he considered Pangborn to be a landmark character from King’s works, describing him as “the Mount Rushmore of Stephen King protagonists.”

While his role is portrayed by Scott Glenn on Castle Rock, this isn’t the first time Alan Pangborn has made an appearance on screen. In George Romero’s 1993 film adaptation of The Dark Half, Pangborn was portrayed by Michael Rooker — who was last seen playing Yontu Udonta in Guardians of the Galaxy Vol. 2. The same year, his character was seen in the film version of Needful Things, by Westworld’s Man in Black, Ed Harris.

The showrunners sourced the character of Pangborn directly from the books, but there are other character references and names sprinkled throughout the series. For instance, Jackie Torrance’s (Jane Levy) character reveals that her uncle is Jack Torrance, the antagonist from King’s 1977 novel The Shining. Castle Rock’s character Joseph Desjardin shares the same name as the brother of Vince Desjardin, a gang member in The Body, also sharing a surname with the P.E. teacher from Carrie, Miss Desjardin.

As a fan of Stephen King, I have to admit it was pretty cool to see Pangborn’s character revisited, and I enjoy seeing him in this modern setting. It will be interesting to see if the showrunners bring back any of King’s other characters for its “wholly original” renewed Season 2, as reported by Variety. In the meantime, I can’t wait to see how things pan out in the end for Pangborn and the rest of the god-forsaken town, and get some clarity to all the burning questions and theories running through my mind.