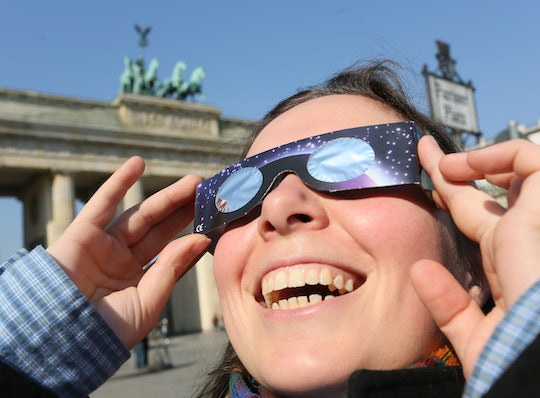 Normally Mondays are the worst, as noted by songwriters, cartoonists, and creators of kitchy t-shirts the world over. But this Monday is bound to be decently momentous on account of the full solar eclipse. Because it's such a rare event, you're obviously going to want to attend one of the many viewing parties held across the country. But you're also going to want to know what stores are selling solar eclipse glasses. Because looking straight at it is obviously not a great idea; you don't want temporary or permanent vision loss, right?

Of course, if you've waited until this late in the game, pickings are going to be rather slim. The solar eclipse promises to have one heck of an audience; all of North America, in fact. And considering the last time the moon passed between the sun and the earth to either completely or partially block out the sun (depending where you will be seeing it) was in 1979, people will probably be pretty pumped. It's probably going to be the social event of the season, guys, you really don't want to miss out.

But before you run out to buy whatever solar eclipse glasses you can get your hands on, be sure you're getting the right ones. The American Astronomical Society (AAS) notes:

The only safe way to look directly at the uneclipsed or partially eclipsed Sun is through special-purpose solar filters, such as “eclipse glasses” (example shown at left) or handheld solar viewers. Homemade filters or ordinary sunglasses, even very dark ones, are not safe for looking at the Sun; they transmit thousands of times too much sunlight.

The AAS shared a list of reputable vendors of solar eclipse glasses that meet international safety standards. Unfortunately, buying online is your best bet. Most physical stores that you could drive to are sold out.

While the price is steep, it's still far better to refer back to the AAS' list of approved glasses than try to cull through the vast number of fake solar eclipse glasses that have been flooding the market in recent weeks. Particularly since some products have even added a phony ISO (International Organization for Standards) label to their glasses, according to a report by CBS News.

Sure, it's frustrating to feel as though you're paying too much. But the other options (missing the eclipse entirely or damaging your eyesight with faulty solar eclipse glasses) are far worse consequences, right?