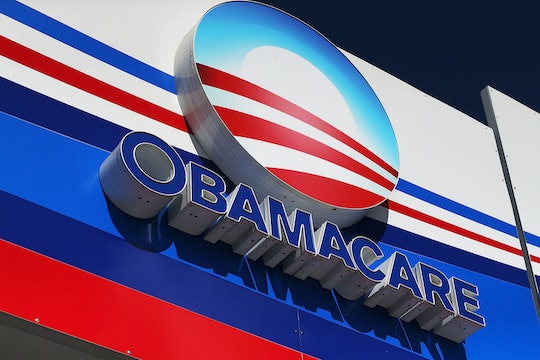 What The Aetna Obamacare Pullback Means For Parents

I live in Canada, guys. Which means many things: I am aggressively polite and always apologetic. My national television channels are only funny in an ironic way, like old episodes of Caillou. My books are way more expensive than yours, no matter what the exchange rate looks like. And oh yes, I have free health care. Which, as a single mom, was basically the most important thing ever. But what about my single moms, dads, and parents in general who are living across the border? What will they do now that Aetna is pulling back on its Obamacare exchanges? And more importantly, what does this mean for parents and families everywhere who are already struggling?

Aetna Inc., one of the top three health insurers in America, made an announcement on Tuesday that it will no longer offer individual "Obamacare" plans in 11 of the 15 states it now services. While Obamacare — officially known the Affordable Health Care Act — has provided millions of individuals and family with accessible health care, it has reportedly been tough on the bottom line for some insurance providers. Aetna Inc. cited serious financial losses in the decision, and will only continue to offer Obamacare exchange options in Iowa, Delaware, Nebraska, and Virginia.

Aetna Inc. is the just latest major health care provider to pull out of Obama's healthcare plan. Two other health care providers, UnitedHealthGroup Inc. and Humana Inc. (which Aetna is in the process of taking over to the tune of $37 billion) have already pulled out of the exchange process.

So what does this mean to parents who are no longer being covered by the Obamacare/Aetna exchange programs? (And yes — approximately 80 percent of Aetna's customers are in individual ACA exchange programs.)

Let's break it down:

While Aetna's customers in affected states will not have to worry about their health care coverage this year, next year, they will be expected to find a new insurer who participates in the Affordable Health Care Act. Once open enrollment begins, patients will have to make a choice between signing up for Obamacare or buying individual insurance policies outside exchanges — that means if you're a parent or an expectant mom, you'll need to start thinking about things now.

Rural Areas Will Be Most Affected

Because of this pull back by Aetna, patients could be forced to choose different physicians or hospitals, depending on coverage provided by their new network. There are not as many insurance providers for rural areas, and many experts believe that the Southern states and rural areas could become a real concern. According to Cynthia Cox, associate director of health reform and private insurance for The Kaiser Family Foundation, about 70 percent of rural areas could go down to just one health insurer next year. Alaska and Oklahoma will be down to just one provider by 2017.

With fewer health insurance providers, patients could very well experience serious delays. One county in particular, Pinal County in Arizona, will be left without any health insurance provider for their area now that Aetna has announced their plan to withdraw. That's a problem (not only because of the overall delays... but because sitting with a toddler in the ER is about to get a whole lot more exhausting).

Premium Hikes Could Be Coming

While major health insurers like Aetna are pulling away from Obamacare, patients could see a fairly dramatic spike to their rates come 2017. In the state of Illinois, for example, Blue Cross Blue Shield (the most popular Obamacare insurer in the state) is looking to spike individual-health care plan premiums as high as 23 to 45 percent, citing the cost of medical services.

Unfortunately, it looks like providing affordable, quality health care for kids is going to get even more difficult for parents.