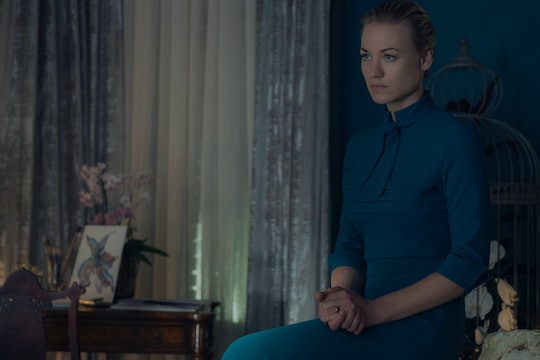 What 'The Handmaid's Tale' Gets Right About Infertility

I've been a Margaret Atwood fan for years, and yes, this is totally me doing that obnoxious thing where I talk about how I loved The Handmaid's Tale before it was cool. But it's true. I read the book (along with her other awesome dystopian work, Oryx and Crake) back in 2010, when I was mourning the end of the Hunger Games series and looking for a way to escape reality without having to sew a cosplay outfit.

Seven years later, Hulu has turned the college lit classic into a must-watch series. A lot has changed since then, most obviously the fact that Handmaid's overall plot of ultraconservatives overthrowing the government and forcing woman to be subservient to men isn't all that far-fetched when you consider who's currently sitting in the Oval Office. (Warning: the following contains spoilers.)

But beyond the fact that the show depicts how easily our own society could slip into this exact same system, I was disturbed by something else while watching the first three episodes: how much of myself I saw in the Commander's wife, Serena Joy.

Let's be real: Serena Joy is a blond snake. She and Narcissa Malfoy would be BFFs in an instant. From the moment she meets Offred, she makes sure to set her straight on the power dynamics in the house and what she thinks of the Handmaids. "Our last one was brand new, it was like training a dog," she sneers. "Not a very smart one." She snaps at Offred for calling her "Ma'am" instead of "Mrs. Waterford" and is territorial over her husband. "I want to see as little of you as possible, do you understand? He is my husband until death do us part. Don't get any ideas," she says. She acts like Offred dropped in looking for a place to crash, rather than being forced into her position against her will.

Infertility is one of those words people whisper behind closed doors, as if saying the words "I can't get pregnant" aloud will cause the condition to spread like a virus.

Serena Joy is tremendously bitter about her inability to conceive, nor can she handle seeing her husband having sex with someone else, even though The Ceremony goes to great lengths to reduce any hint of sensuality to the process. (I never though it was possible to make the man who played Shakespeare in Shakespeare In Love unsexy, but congratulations, Hulu, you did it.) Even though Offred tells her the chances of conception are better if she lays on her back after intercourse, Serena kicks her out of the room immediately after the Commander has done his part, unable to look at the woman who has literally come between her and her husband.

Serena seems to hate the entire Handmaid concept, while simultaneously loathing the fact that she needs a handmaid to begin with. "What you do, what we do together is so terrible," she says to Offred in a rare moment of vulnerability. "It's terribly hard and we must remain strong."

What's different about Serena's position, as opposed to that of women who struggle with fertility issues in contemporary society, is that in the world of Gilead, infertility is the norm instead of the exception. Many couples can't get pregnant, which is why the Handmaids are considered necessary in the first place. And of the pregnancies that do take, most of the babies born are "unbabies" or "shredders", born with deformities and then taken away to an unknown fate. That's why there's so much joy when Mrs. Putnam's handmaid Janine gives birth to a "keeper."

But in our society, infertility is more common than most people realize. One in eight couples struggle to get pregnant or maintain a pregnancy, according to the national infertility association RESOLVE. Even if you or someone you know has dealt with fertility issues, it's still not something we talk about openly in society. Infertility is one of those words people whisper behind closed doors, as if saying the words "I can't get pregnant" aloud will cause the condition to spread like a virus.

Like Serena and the Commander, my partner and I had our own battle with infertility. While we're now the parents of twin 4-year-old boys, I remember what it feels like to want a child desperately but not be able to conceive one. It's taken a ton of courage and a dash of IDGAF for me to be able to talk about my own fertility journey, and there are still details I keep to myself, because internet trolls are a nasty breed.

Serena's desire to keep Offred out of sight and mind is not that far off from the reality of women who struggle to keep their fertility issues a secret.

People love to wonder whether or not a pregnancy was medically assisted (remember the speculation when Beyonce announced she was having twins?), as though it makes a difference. My own twins were born as the result of IVF and other advanced reproductive technologies and I can assure you, they're just like the babies my girlfriends had after doing things in the bedroom. But our society feels it necessary to make the distinction, which is why so many women undergo infertility treatments without talking about them. In that way, Serena's desire to keep Offred out of sight and mind is not that far off from the reality of women who struggle to keep their fertility issues a secret.

In episode 2 Janine, Mrs. Putnam's handmaid, is in labor. The handmaids are upstairs helping Janine through her contractions, and all the wives are downstairs. But they're not waiting the way you might expect an adoptive parent or parent via surrogate to be. Instead, Mrs. Putnam is pretending to be in labor too, and the wives are comforting her as she feigns contractions and moans against a mountain of pillows. Serena's front and center, holding her hand.

Serena wants a baby, yes, but she and the wives also yearn for the pregnancy experience as well. I understood this longing.

While this might look like an attempt by the wives to pretend the Handmaids don't exist and that they're the ones carrying the baby, I saw it differently. Raising a child is a distinct and separate experience from being pregnant. It's one of the reasons why telling someone who's dealing with infertility to "just adopt" is both ignorant and hurtful. Serena wants a baby, yes, but she and the wives also yearn for the pregnancy experience as well. I understood this longing. I wanted to feel what it was like to have a person grow and stretch inside me, which is why my partner and I pursued IVF over adoption.

It's worth noting that in the Handmaid's world (or at least in the book), women bear all of the blame for a couple's infertility issues. There's no testing or screening to see if the male in the partnership might have fertility issues, presumably because the men of Gilead have so much power, they would never even entertain the thought that they're shooting blanks.

However, the idea that fertility is solely on the shoulders of women is seen in our world as well. The numerous at home sperm tests you can buy online are evidence of the fact that some men are hesitant to let others know if they have a low sperm count. Men who view sperm count as synonymous with virility and masculinity may also refuse to consult a doctor when a natural pregnancy just isn't happening. And even in couples where both partners are willing to seek professional assistance, between the medications, injections and procedures, much of the business of having kids still falls into the woman's lap. Serena may not have to inject herself with progesterone every evening, but she's the one who's tasked with taking care of her Handmaid.

Perhaps the most difficult moment for Offred thus far is when she tells Serena that her late period has arrived. Serena's reaction is ugly and primal. She drags Offred to her room and screams in her face to never leave the room again. "Things can get much worse for you," she threatens before storming out.

Of course, it's not Offred's fault that she isn't pregnant. Still, if you've ever experienced a miscarriage or even having your period show up when you were hoping that you were pregnant, rational thought sometimes goes down the drain. Even though Offred does her best to break the news gently, Serena can't handle what she perceives as her own loss. It in no way justifies her behavior, but as someone who sobbed her way out of a difficult doctor's visit more than once, I understand it.

Assuming the series stays true to the book, things are going to get worse for Offred before they get better. Serena Joy will continue to be the woman who has everything — except for the one thing she really wants. And although we're supposed to loathe her, parts of her story hit home with me — and, I'd wager, with other women who've struggled with fertility issues as well — more than I care to admit.