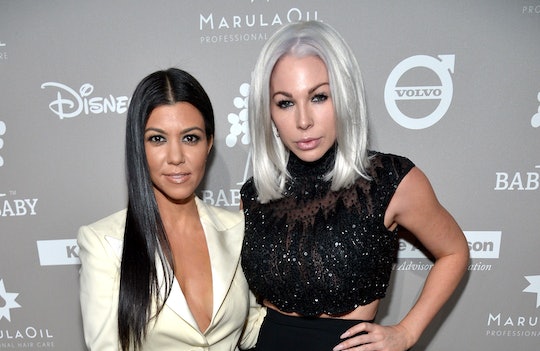 You guys, there is some drama going on, and I desperately need more info. Can anyone tell me what happened between the Kardashians and their former makeup artist, Joyce Bonelli? Because it looks like there's some serious beef, and you know when the Kardashians feud with someone, it's on like Donkey Kong. Just ask Taylor Swift, Naya Rivera, Blac Chyna, Chloë Grace Moretz, Amber Rose, Bette Midler, or, um, Rob. But generally, we know what the feud was about, and this time, everyone's keeping quiet... at least for now.

In an interview last year with The Hollywood Reporter, Bonelli, who worked with the family for over a decade, said they've "known each other since the beginning, before they were famous." And according to her, she wasn't just the hired help: "We text every other day and we talk about everything. Even if I'm working with a different client we're always talking and FaceTiming — we talk about kids, we talk about the fun, scandalous stuff. They're like my sisters." Even when traveling with them, she added, "it's not like the regular [job] where you come and leave. We're stuck together." Which begs the question, why did her "sisters" recently give her the boot?

Until very recently, it seemed like everything was fine in Calabasas. On Wednesday, Bonelli posted birthday wishes for Khloé on Instagram, referring to her as the "ma·tri·arch of lifeeee," declaring hers the "HOTTEST BIRTHDAY BOOTY ALIVE," and assuring Khloé that she's "always got [her] back." But on Thursday, a source told Us Weekly that the family had cut ties with Bonelli, saying, "She hasn't worked for them for months." The source also added that not only is she no longer their makeup artist, they don't even speak to her anymore. Dude, does she know this? Because she seems to think they're still besties.

If you're wondering why anyone should care about some random makeup artist, think of her employers' signature looks. Bonelli is the person responsible for Kylie Jenner's lips, according to heat, so if you've ever spent $30 on a tiny tube of lip gloss or accidentally hickeyed half of your face with a shot glass while trying to emulate the injectable-infused pout of a 16-year-old reality star, blame her. She's also the person behind contouring, the beauty fad where people paint themselves with eight different shades of foundation until their noses and faces appear so long and narrow, they bear a closer resemblance to llamas than human beings.

The source who spoke with Us claimed that the family just "didn't see [Bonelli] as a right fit anymore," which is an odd reason, given that she basically invented all of their faces. And although the source claimed the split was amicable, according to Elle, the entire family — and even their friends! — have unfollowed Bonelli on Instagram. And we all know how seriously they take unfollowing.

The news of Bonelli's departure from The House That Kris Built started picking up steam throughout the day on Thursday, and although she hasn't exactly spoken out about it, Bonelli made a very interesting wardrobe choice in an Instagram post on Friday morning. Serving as the backdrop for an anonymous hairy leg, Bonelli posed in a bathrobe bearing the warning, "f*ck with me I DARE YOU." That's an interesting look. Is she cautioning the KarJenner Klan against trashing her in the media? Is she worried about losing her other celebrity clients, like Chrissy Teigen and Nicki Minaj? Is she threatening to spill some secrets? Because after 11 years of being up in those faces, she must know where the bodies are buried. We can't let this mystery go unsolved like "Becky with the good hair" Let's treat it like "Who bit Beyoncé?" and get to the bottom of it.