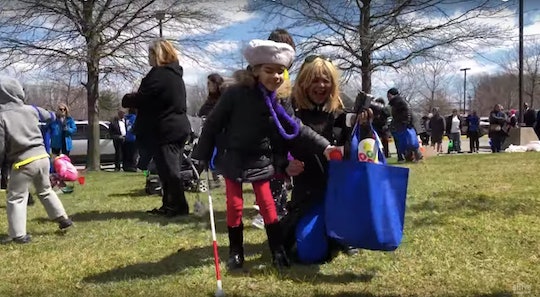 In my childhood, celebrating Easter was largely defined by baskets stuffed with goodies, early morning pancake breakfasts at the community center, and of course, the Easter egg hunt. And while they’re great, the Easter egg hunts most of us remember have never been that accessible — from having to run across uneven terrain, to sometimes being expected to climb, and simply having to rely on sight alone to find eggs — there are barriers for many kids. But what this state did for visually-impaired kids on Easter reminds us how we should be treating kids with disabilities.

In NYC, Easter egg hunts are extremely popular, with sites like Mommy Poppins warning families to ensure they arrive well before the event kicks off. But for children with visual impairments, Easter egg hunts pose one obvious concern: how can a child independently take part in an activity that continues to revolve around sight? It might seem like a small thing, but it’s a sign of how normalized inaccess becomes for children with disabilities. And while it might be a reflex to say it doesn’t matter, just have a parent help them, part of the joy of Easter egg hunts is that first mad dash away from your parents. Additionally, some children’s guardians are visually impaired, too.

Six months ago, Holly Bonner, who is blind, began organizing an event with the nonprofit City Access New York to solve this dilemma in her city, according to NBC New York. Bonner recruited the New York Division of the Bureau of Alcohol, Tobacco, Firearms, and Explosives to help make beeping eggs. The eggs were created by building a circuit inside, with a nine-volt battery, wires, and a switch so it emitted a beeping sound, NBC reported.

The event hosted about 50 visually impaired kids and adults on the lawn of the Commons Cafe in Staten Island, according to CBS New York. “They came from as far away as Cape May, New Jersey and Ocean County; we even had one family from Connecticut,” Bonner told CBS New York. “To see those kids who never been in an egg, it could move you to tears, it really could.”

The sentiment was shared by the children’s parents. Ana Linares, the mother of Milagros, told CBS New York, “She is able to hear the beep, then she’s able to run. It’s exciting for me and her.”

Beeping Easter eggs have been made in the past, notably by father David Hyche, whose daughter is blind. Similar to the ATS design in New York, Hyche’s eggs used a nine-volt battery, battery clip, and beeper, all activated by a switch. He used his eggs to organize a beeping Easter egg hunt in Birmingham, Alabamam in 2005, and HuffPost reported that the event has since grown to three annual hunts throughout Alabama, as well as hunts in at least six other states.

There have been more events organized to make Easter egg hunts accessible for children with other disabilities, too. In 2017, the “First Annual Special Needs Easter Egg Hunt” was organized in Fort Smith, Arkansas. According to HuffPost, one of the most interesting parts of the egg hunt was the inclusion of magnetic eggs that kids with physical disabilities could easily reach using craft sticks with a magnet on the end.

The event also included a separate hunt for kids with severe sensory issues and a “calming room” for participants who might be overwhelmed with the celebration, according to HuffPost. For participants who couldn’t have chocolate due to allergies or other food sensitivities, they were able to trade in candy for stuffed animals.

Seeing inclusive Easter egg hunts pop up across the country is fantastic, but it’s still a reminder of how much work needs to be done to improve daily access for children with disabilities. No child should ever be an afterthought. By taking inspiration from the hard work represented in this article, hopefully inclusion can become a norm, rather than the exception.