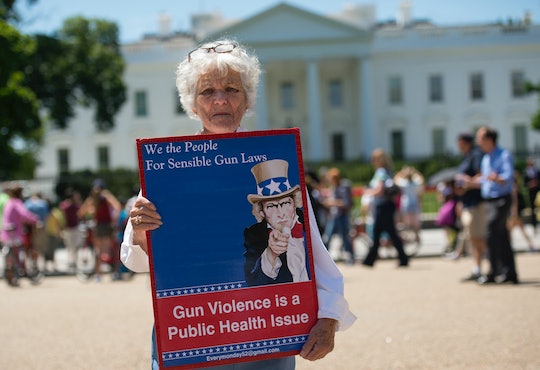 The Women's March On Washington Will Start Early

It all started the day after President-elect Donald Trump was voted the 45th President of the United States. After months (and possibly years) of misogynistic, xenophobic, and racist rhetoric, for millions of Americans Trump's win felt like a step backwards. To a time when only certain voices mattered, when decisions were made behind closed doors. Except this time around, there are people who want to make sure the decision makers know; all voices matter. Hence the birth of the Women's March on Washington. If you plan to attend, you should know what time the Women's March starts, because I believe it's going to be a historic moment.

As of right now, there could potentially be at least 400,000 people descending on Washington on Jan. 21, the day after the Presidential Inauguration, and the march is set to begin at 10 a.m. One of the organizers of the event, which cropped up as a Facebook page in the hours after Trump's win, told The New York Times she felt it was important to hold the march the day after he officially takes office as a reminder that "we are watching." Breanne Butler said:

We’re doing it his very first day in office because we are making a statement. We are here and we are watching. And, like, ‘Welcome to the White House.'

The Women's March started as a Facebook page created by Hawaiian retired attorney Teresa Shook in the aftermath of Trump's divisive win against Democratic nominee Hillary Clinton. Shook thought it might be a good idea to gather some women in the capital to protest Trump's win; she went to bed, and by the time she woke up the next morning, 10,000 women had joined The Women's March, according to The Washington Post.

It was a grassroots idea that together, we can create change, but it has grown into a mass movement. The Women's March will be an inclusive event, where all activists and protesters who want to be heard and seen by the incoming Trump Administration will have a chance to converge on the capital. The Women's March website shared the vision of what they are trying to accomplish:

The rhetoric of the past election cycle has insulted, demonized, and threatened many of us - immigrants of all statuses, Muslims and those of diverse religious faiths, people who identify as LGBTQIA, Native people, Black and Brown people, people with disabilities, survivors of sexual assault - and our communities are hurting and scared. We are confronted with the question of how to move forward in the face of national and international concern and fear.

There are many reasons to march, all as individual and unique as the people making the trek to Washington in the dead of winter to challenge the new president. But one reason holds true for everyone; people just want to be heard.