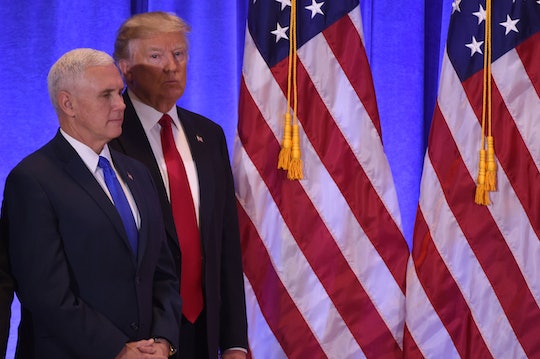 Next Friday, the United States will officially bid farewell to outgoing President Barack Obama when former reality-TV star Donald Trump is sworn in as the 45th President of the United States. The road to Inauguration Day has been a rather bumpy one for the president-elect, as his inauguration committee struggled for weeks to find celebrities to fill out the event agenda. But Jan. 20 is right around the corner. So what time does Trump become president?

Supreme Court Justice John Roberts will swear in Trump and his running mate, former Indiana Gov. Mike Pence, as president and vice president, respectively, at 12 p.m. Eastern Time on the West Lawn of the U.S. Capitol Building, according to Newsweek. Music by the Mormon Tabernacle Choir and former America's Got Talent contestant Jackie Evancho will kick off the swearing-in ceremony at 9:30 a.m., which would then be followed by opening remarks at 11:30 a.m.

The presidential procession and inaugural parade will immediately follow the swearing-in ceremony. The procession begins at the steps of the Capitol and runs along Pennsylvania Avenue, where Trump, Pence, and their families will make their walk to the White House followed by parade participants. There will be 34 local and six national groups slated to perform during the parade. That includes the New York Rockettes and the Talladega College marching band, despite protest from members. The parade will end around 3 p.m. Eastern Time.

Three official New York-themed balls are scheduled for the evening of the inauguration, so far. They begin at 7 p.m. and run until 11 p.m. The Salute to Our Armed Services Ball will be held at the National Building Museum, respectively, while the two other balls will take place in the Walter E. Washington Convention Center, according to Newsweek. Participants can expect the parties to be New York-themed.

A wreath-laying ceremony at Arlington National Cemetery and a welcome concert are scheduled for Jan. 19 to kick off Inauguration Day weekend. Trump's inauguration website doesn't list the times.

An interfaith national prayer service at the Washington National Cathedral will scheduled for Saturday, Jan. 21, although a start time has not been determined. The same day, hundreds of thousands of people will also gather near Capitol Hill for the Women's March on Washington to protest Trump's inauguration; that starts at 10 a.m. Eastern Time. Activists in Washington D.C. and cities across the country have also scheduled protests for Inauguration Day itself.