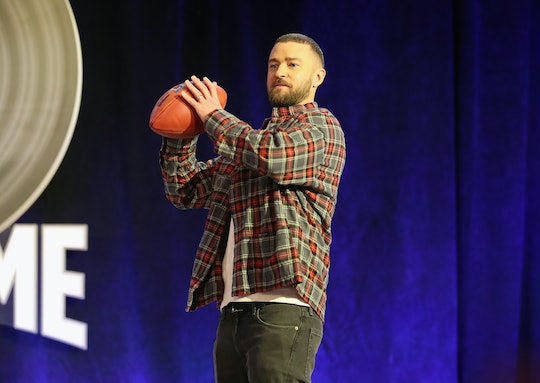 Everyone knows that the best part of the Super Bowl is the snacks, right? Well, the snacks and the halftime show, of course, especially if you're one of those people who really doesn't care about football at all. If you're one of those people, you'll undoubtedly want to know what time Justin Timberlake is performing at the Super Bowl this year, so you can load up your plate with wings, dip, and grab another drink just in time to settle down in front of the TV so you don't miss a thing.

This is the tricky thing about football, though. You never know how long the game is going to take, and there's no precise time slot for the start of the big halftime show. Kickoff is at 6:30 p.m. ET, though and most games usually last about three to four hours, which means the halftime show should start somewhere around 8 p.m. ET, according to Entertainment Weekly. But again, this is just an estimate. Time means nothing in this game, so you can't even really trust the clock to count down to the big show, but you can usually get a good estimate if you plan for around 8 p.m ET. And hey, if you get impatient, there's always more dip, right?

The last time Timberlake did the Super Bowl halftime show was in 2004, with Janet Jackson. In case you somehow missed it, that was the year she had a "wardrobe malfunction," and her nipple was seen briefly on national, live television. They were singing "Rock Your Body" and on the lyric, "bet I'll have you naked by the end of this song," Timberlake tore Jackson's top off.

According to the Washington Post (and most people watching), it was clear that there was a layer of fabric that was supposed to cover her actual boob, but he accidentally tore through it in the heat of the performance. Controversy ensued, of course, even though Twitter wasn't even invented yet. Imagine that, right?

The two have reportedly made peace "privately" according to the Man in the Woods singer, but in the wake of the event, Jackson took a lot more heat for the exposed nipple and was deemed Not Family Friendly, which means we never see her at huge events anymore, according to Rolling Stone. In fact, FCC chairman Michael Powell admitted to ESPN Magazine back in 2014 that Jackson was wrongly held accountable for the incident. "It all turned into being about her," he stated. "In reality, if you slow the thing down, it's Justin [Timberlake] ripping off her breastplate."

Timberlake's career, however, remained unscathed, which is why some people found it controversial that he was tapped to do the show again. And also why they're thinking that he might bring her out on stage as a way of making amends.

Alas, that won't be happening, according to CBS News. He said at a press conference about the performance that there won't be any 2004 reprisals. When asked about Jackson or even *NSYNC showing up, he straight up said, "No."

To be honest, I had a ton of grand ideas about special guests. There's a whole list. I think Vegas has a lot of odds on it, I heard. From N'Sync to [Jessica Biel] to Chris Stapleton to Janet, but this year, I'm just excited — my band, the Tennessee Kids — they're my special guests and I'm excited this year to rock the stage. It's going to be a lot of fun.

But just in case you think that means that Jackson is banned from the event, the NFL released a statement after it was announced that Timberlake would be headlining the halftime show, assuring viewers that wasn't the case:

There’s no ban. We are not going to comment on any speculation regarding potential guests. There may be no guests. Along with Pepsi, we’re excited to have Justin Timberlake.

Timberlake's new album was released on Friday, so it's possible he'll perform a single from that, but the halftime show is a time do some tunes that everyone knows and can jam along to, so he likely won't do just new songs. Also, it's still possible that he'll bring out some special guests even though he swore up and down that he wouldn't be. That's the point of a surprise guest, right?

Sheesh, I'd even take his producer, Timberland coming out (which would mean Missy Elliott, too, maybe) or Rihanna, since he's collaborated with her before. Or bring Pink out, since she's singing the National Anthem at the beginning of the game. It is the Super Bowl, and as we learned all the way back in 2004, anything can happen.