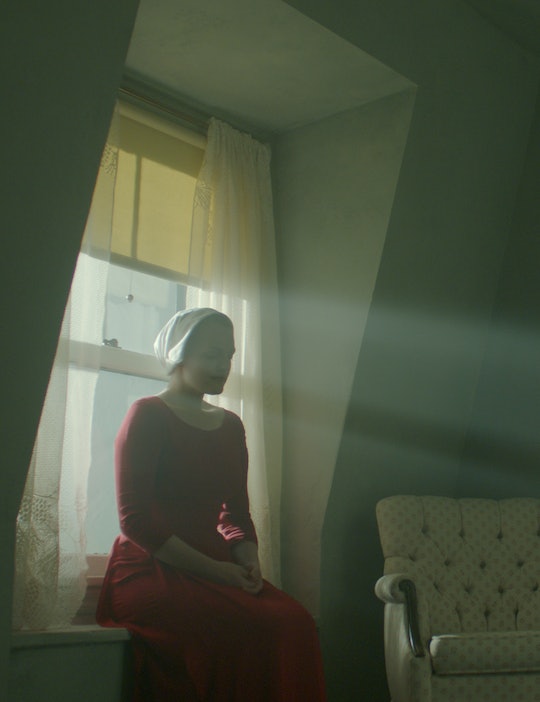 What Time Period Does 'The Handmaid's Tale' Take Place?

Hulu's much-anticipated adaptation of Margaret Atwood's 1985 novel The Handmaid's Tale comes out on April 26, and the miniseries is frighteningly relevant. It stars Elisabeth Moss as the novel's protagonist Offred, a "handmaid" to the elite ruling class who has been forced into reproductive slavery by the state. In the Hulu series, handmaids wear stylized uniforms reminiscent of Puritan colonial garb, which may have some viewers unfamiliar with the novel wondering: what time period does The Handmaid's Tale take place in? Spookily enough, it's actually set in a dystopian near-future.

As we see in the trailer, The Handmaid's Tale opens in relatively normal, seemingly modern-day New England. But when a Christian fundamentalist group called the Sons of Jacob stage an attack, killing the president and most of Congress, it's war on women's rights. The Sons of Jacob, having risen to power after their attack, suspend the Constitution under the guise of restoring order to the country. They instate new laws to build a heavily militarized, totalitarian theocracy, based on Old Testament values. Companies are bound by law to fire all female employees, and all women's bank accounts are shut down. Women in the Republic of Gilead — the new name given to former New England under rule of the Sons of Jacob — are even forbidden to read, by law.

Through a series of flashbacks, we see Offred trying to escape to Canada with her husband and daughter, but they get caught. Offred is separated from her family and designated a handmaid, which means she must act as a surrogate for the ruling class of men whose wives are largely barren due to a combination of pollution and rampant sexually transmitted disease. Reproductive slavery for fertile women is justified by the state due to this "plague" of sterility. Handmaids are forcibly impregnated by men of the ruling class in rituals called "the ceremony," during which their wives are present. Then, the handmaids are forced to carry their pregnancies to term and hand the babies over to the family after they're born.

The novel concludes with an epilogue set in the year 2195, which frames the preceding story as part of an academic symposium on "The Gilead Era." Here, it's implied that the Republic of Gilead eventually toppled, women gained back their rights, and a more equal society was restored — although one still different from the United States that existed before. It's a chilling look at how slippery the slope to religious authoritarianism can be, and The Handmaid's Tale couldn't get an on-screen adaptation at a more relevant time.