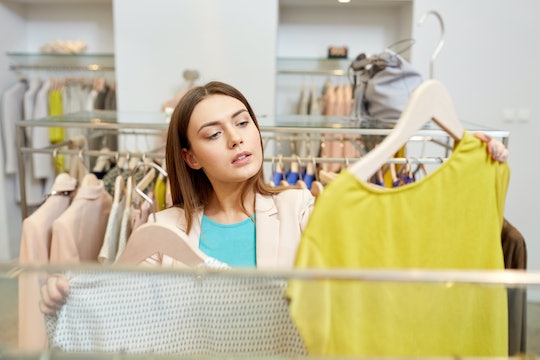 Everyone loves scoring a good deal but not everyone is down with clipping coupons. Fortunately, there are other ways to score massive savings, like paying attention to the calendar. Certain months are better than others for buying specific items — you just need to be a savvy shopper. We've rounded up the best and worst things you should buy in June. And to start your summer shopping adventures off strong, pick up a free donut for National Donut Day on Friday, June 1. Everything tastes better when it's free, right?

So what other items are going to be discounted this June? The experts over at DealNews are total pros at identifying the best items to buy when, and according to their research, June is the month to stock up on things like underwear and lingerie, movie tickets, and dinnerware. It also happens to be the worst time to spend money on things like back to school electronics, gas, and summer clothes. It may all sound a bit random but there are actually some serious market insights that can explain why stores put certain items on sale during specific times of the year. I love a good deal so let's get into it.

If you're like me, you might be wondering why bra and panty prices get slashed at the start of summer. It largely has to do with the huge semi-annual sale Victoria's Secret has every June. "While many other lingerie providers might have already followed the mid-year sale structure, Victoria's Secret has certainly defined it as a time to save on undergarments; as a result, the competition has to follow suite if they weren't already," explained Lindsay Sakraida, Director of Content Marketing of DealNews.

You can also expect to score some blockbuster-size deals on movie theater tickets. It might seem serendipitous that movie ticket prices drop right when the kiddos are getting out of school, but that's entirely by design.

"Movie theater chains know that, starting in June, a lot of kids are now out of school and looking for ways to entertain themselves," explains Sakraida, so they offer "enticing promotions that encourage repeat visits throughout the summer," she says and hope that they make their money off of concession sales.

Another item you can expect to save big on in June is dinnerware, according to DealNews. Real Simple further reported that you can probably find items between 25 and 50 percent off. That's because we're heading into wedding season and retailers know that many people will be buying registry gifts. This is a great news if you're looking to spend less on all of those weddings you have on your summer calendar. But even if you're not wedding bound, this is the perfect chance to revamp your own kitchen a little. Now's the time to score huge discounts on plates, bowls, and other kitchen items you've probably been putting off buying.

If you love Oneida dinner or flatware, check out their site around the middle of the month, when Sakraida expects the site-wide promotion to run. "Last year, Oneida offered its June discount in the middle of the month, and then another similar coupon a few days later. This year, we predict that Oneida will offer its big site-wide promotion in the second or third week of June," advised Sakraida.

June might be the month to snap up some things, but certainly not everything. If you can help it, try to not to buy too much gas in June, advised DealNews. Gas prices reached a nearly 3-year high in May, and that trend is likely to continue, according to Fortune. Here are some ways to scale back: challenge yourself to walk more (always good for getting your Fitbit steps in!) or opt for local activities instead of logging miles on a roadtrip.

You'll also want to skip buying laptops and summer clothes in June, according to DealNews. You'll score better deals on laptops if you wait until July, when back-to-school savings start. And if you can hold off on buying new summer duds until later in the season, they'll likely be marked down too, especially come August when the hit the clearance rack, according to DealNews.