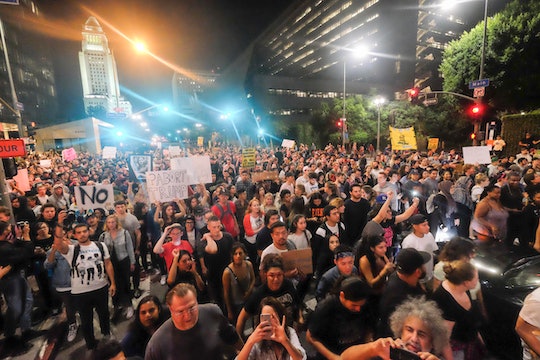 What If There's A Stampede At The Women's March?

Saturday's planned post-inauguration Women's March on Washington is an opportunity for like-minded people to send a strong message to Donald Trump that they expect him to advocate for the rights of all Americans, not cut them down. It's an essential cause that is expected to draw hundreds of thousands of people to the nation's capital. That's great news for unity and those supporting a progressive agenda — as well as a formidable challenge for safety, security, and logistics. Authorities and the event's organizers are aiming to stave off any and all negative eventualities, from terrorists attacks to a shortage of porta-potties along the route. And because there could be as many as 200,000 people marching and demonstrating their way through that trek, it's important to know what to do if there's a stampede.

That's because stampedes don't just exist in that heartbreaking scene from The Lion King. (You know the one.) They can and do happen with humans, most often when a huge crowd assembles and either an outside force or a feeling among the attendees (even just a rumor) sends alarm rippling through the gathering and causing people to start shoving. It happened at a German music festival in 2010, when a panic at a tunnel entrance resulted in the death of 21 attendees. And panic again triggered a stampede that ended in the deaths of more than 300 at a festival in Cambodia that same year.

With a private security firm having been hired and more than 1,000 marshals scheduled to be at the event to maintain order, the Women's March on Washington is likely to be as safe as it can be. Still, in the unlikely event that the fervent marching does result in a huge buildup of people packed against one another, it's good to be prepared. But how?

Unfortunately, the best way for people to to protect themselves from potentially deadly stampedes is to avoid packed venues and other high-density events, according to The New York Times. Short of that, there's one tip that's important to keep in mind: Don't get caught up in the mob mentality and simply mimic what others are doing. University of the Philippines physics professor Caesar Saloma learned through is research with rats that the natural instinct is to blindly follow, but that's dangerous. It's much better to avoid bottlenecks at the exits everyone else is flocking toward.

A little-known (and downright terrifying) fact about stampede deaths is that they generally do not occur when a person is trampled, but rather when they're standing up and pressure from the bodies around them makes it impossible to breathe, as Jeff Wise wrote for Psychology Today. There's a not-especially-reliable possible antidote for that, but Wise isn't convinced:

It has been suggested that some people have survived stampedes because they were turned sideways to the press of the crowd, so that their shoulders absorbed the force rather than their ribcage, and they were still able to breathe. But while I'd keep this tidbit in mind, I wouldn't count on it as a life saver.

So, the best way to stay safe? In addition to staying alert and vigilant, try not to get caught up in the emotion of the throng. That's only in the case of a stampede, though – because the energy of the march will surely be contagious and impossible to deny.