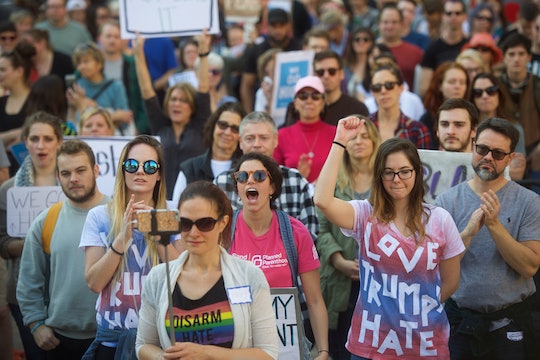 Safety At The Women's March Is A Priority

On President-elect Donald Trump's first day in office, an estimated 200,000 people will march on Washington, D.C. in defense of fundamental human rights. But given the scale of the event, many people are wondering if they will be safe at the Women's March on Washington. While there are safety risks in attending any event of such a size, the march organizers have made sure that there will be plenty of security in place for the sure-to-be-historic event.

In recent weeks, as I've excitedly told my friends and family (including my wonderful and worry-prone grandmother) about my plans to attend the Women's March, some of them have expressed concerns about the safety of an event on such a large scale, particularly one with a political bent in such a contentious climate. And yes, we have seen all too well how large events can be targeted. Yes, there are legitimate fears about how police forces might respond if things get out of control. (Will there be arrests? Tear gassing?) Yes, any time you go to an event with hundreds of thousands of other people, you are putting yourself into a situation of higher risk than you would be by just sitting alone on your couch. But we can't sit alone on our couches forever, especially not now.

And the organizers of the March have worked hard on security. According to the FAQ section on the official website for the March, the Woman's March has a permit, meaning that the police, as well as all other relevant city agencies, are involved in planning and implementing security measures. On top of that, the March organizers hired a private security firm, and over 1,000 trained marshals will be present to help direct marchers and ensure order. Public information about the route has been withheld until the last minute, to help with security, and attendees have strict guidelines on what they can and cannot bring. Anything that can be construed as a weapon, included sticks for signage, is obviously out, and large bags have to be transparent.

We are planning a peaceful demonstration and do not anticipate there being any negative interactions with the police. We encourage all participants to observe our principles of non-violence if they wish to participate in this march.

Still, there will be legal observers present, and a legal hotline to call in case of any issues. In terms of other safety concerns, there are a few first aid items marchers can bring with them that could be useful, like band-aids, water, and goggles.

Of course, one can never guarantee total safety, even with all the security in the world. But marching is a vital part of America's history. And hopefully, the Women's March will help lead us to a brighter, fairer future.